Arthur, whose contract will be reviewed after the World Cup, said he will do his best to lift the team.

Pakistan coach Mickey Arthur has vowed to remind his players of the “cornered tigers” spirit which Imran Khan instilled in his team-mates to win the 1992 World Cup.

An 89-run defeat by arch rivals India in Manchester on Sunday has left Pakistan’s hopes of qualifying for the semi-finals of the ICC World Cup 2019 hanging by a thread, with only Afghanistan below them in the 10-team table.

Yet Pakistan now find themselves in exactly the same position as when they won the 1992 World Cup a tournament which, like this one, featured a round-robin group phase.

They now have three points from five matches with only one win a surprise success against hosts England three defeats and a no-result. (ALSO READ: ICC defends India-Pakistan finish citing net-run rate as potential tie-breaker)

As happened in 1992, Pakistan started this World Cup with a defeat by the West Indies. But 27 years ago, they had a famous rained-off match against England at Adelaide and that single point gained from the washout helped Pakistan sneak into the semi-final.

Then they beaten minnows Zimbabwe and lost to South Africa and India before defeating Australia, Sri Lanka and New Zealand in their last three group matches.

Pakistan also had to rely on Australia beating the West Indies to claim the last semi-final spot, where they downed co-hosts New Zealand before upstaging England in a Melbourne final. (ALSO READ: ‘Pakistan of the 90’s used to enjoy upper hand but now India is better’)

Khan, now the prime minister of Pakistan, had famously worn a T-shirt with “cornered tigers” written on it and said at the toss he wanted his players to play like tigers.

Arthur lamented Pakistan’s start to this World Cup by telling AFP: “It is disappointing to be in such a position.

“We can’t change the past but can influence the future and I will definitely remind my players of the spirit of ‘cornered tigers’,” the experienced South African coach added.

But Pakistan’s task will be tougher than in 1992 as they have to not only win their last four matches but also improve their inferior net run-rate of minus 1.93. They will also have to hope other results go their way.

Pakistan next play South Africa at Lord’s on Sunday before facing New Zealand, Afghanistan and Bangladesh.

Arthur, whose contract will be reviewed after the World Cup, said he will do his best to lift the team. “I will be doing everything I can and using all my experience to make this happen,” he said.

Arthur, who guided Pakistan to the 2017 Champions Trophy title, said: “I love this team. I love Pakistan, so I will definitely use all my experience to inspire this team.” (ALSO READ: ‘This Pakistan team can reproduce 1992 magic’)

Sunday’s reverse meant Pakistan have lost all seven of their World Cup matches against India. But they also lost a group match to their fellow subcontinental cricket giants in 1992.

“We are extremely disappointed with the defeat, but we have to put it behind us and stand together and come back strong,” Arthur said. 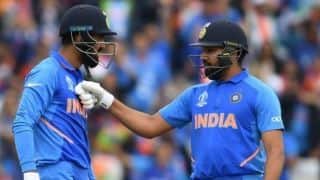