Thousands of Indian fans had bought the tickets for the finals, hoping Virat Kohli's men would reach the summit clash.

Black Caps allrounder Jimmy Neesham has appealed to the Indian fans to resell their tickets via the official platform if they don’t want to come and watch the ICC Cricket World Cup 2019 finals to be played between New Zealand and England at Lord’s on Sunday.

“Dear Indian cricket fans. If you don’t want to come to the final anymore then please be kind and resell your tickets via the official platform. I know it’s tempting to try to make a large profit but please give all genuine cricket fans a chance to go, not just the wealthy,” Neesham tweeted on Saturday.

Thousands of Indian fans had bought the tickets for the finals, hoping Virat Kohli’s men would reach the summit clash. However, their hopes were dashed by the Kiwis who defeated the Men in Blue in the semi-final at the Old Trafford, leaving the Indian fans with a choice of either watching the summit clash between New Zealand and England or to skip it or resell their tickets.

Recently, the International Cricket Council (ICC) came out with a ‘return policy’ wherein fans can get a full refund if they return their tickets.

A senior ICC official said that this was a little effort on the part of the international body to counter the nemesis of black marketing of match tickets, especially in the knockout games. (ALSO READ: England vs New Zealand final ticket prices go up to Rs 13.78 lakh per ticket; ICC warns fans over WC tickets on unofficial websites)

After Wednesday’s win, New Zealand skipper Kane Williamson had also urged the Indian fans to support them in the finals.

“I hope they’re not too angry. Obviously, the passion for the game in India is unrivalled and we are all fortunate to play this sport and have a country like India be right behind it,” Williamson had said at the post-match press conference.

“But hopefully, we can adopt 1.5 billion supporters and they’ll be supporting us,” he added. 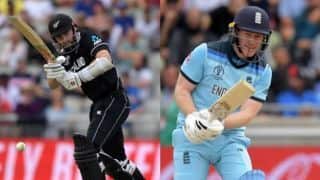