The Blackcaps are unchanged, while South Africa brought in Lungi Ngidi.

A damp outfield delayed the start of the match by an hour and a half, with the game rescheduled for 12pm local time. One over was knocked off per innings, making it a 49-overs-a-side affair.

Williamson, after winning the toss, decided to put South Africa in to bat on what looks a pretty dry surface despite the early morning rain in Birmingham. New Zealand went in with an unchanged team.

As expected, South Africa brought in Lungi Ngidi in place of Beuran Hendricks as the only change to their XI.

South Africa need to win this game to stay in contention for the World Cup semi-finals. New Zealand are the team to have eliminated them from the 2011 and 2015 World Cups. The last time, in fact, that South Africa beat New Zealand in a World Cup game was at Edgbaston in 1999. 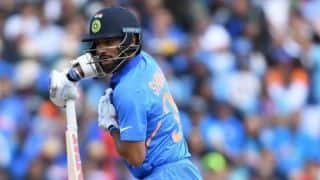