Eoin Morgan insists England can achieve their dreams of World Cup glory so long as they stick to their "A-game" after a win over India revived the hosts' prospects of reaching the semi-finals.

Eoin Morgan insists England can achieve their dreams of World Cup glory so long as they stick to their “A-game” after a win over India revived the hosts’ prospects of reaching the semi-finals.

Morgan’s men came into Sunday’s match at Edgbaston on the back of successive defeats by Sri Lanka and Australia.

But they were far more like the team that started this World Cup as the top-ranked one-day international side during a 31-run win that ended new number one India’s unbeaten start to the tournament. ALSO READ: Rohit ton, Shami s five not enough as England hand India first loss

Jonny Bairstow scored 111 and together with Jason Roy, who made 66 on his return from a torn hamstring, shared a first-wicket stand of 160 — the highest opening partnership of this World Cup.

Ben Stokes then added a brisk 79 as England piled up 337-7 after Morgan won the toss on a good pitch. ALSO READ: MS was trying really hard to get the boundary, but it wasn t coming off: Kohli defends Dhoni-Jadhav partnership

“I’m delighted,” said Morgan, whose side will book a place in the last four if they beat New Zealand in their final group match in Durham on Wednesday. ALSO READ: No uncertainty regarding No 4: Rohit Sharma

“The manner in which we played today was outstanding and resonates with everyone in the dressing room. It’s come at a good time against a really good team.”

England have yet to win the World Cup but Morgan said: “Having played how we did today is very encouraging for us.

“The closer we get to playing our A-game, the more chance we have of going all the way.

“If we were scraping along I wouldn’t be as confident.”

The former England captain accused Bairstow of being “negative” and “pathetic” for saying “people were waiting for us to fail”.

A smiling Morgan said of Bairstow: “He does tend to get fired up and that suits him, regardless of what’s happened in the week.

“He likes a bit of fire in his belly and I don’t mind that when he comes out and plays like that.”

Meanwhile, Bairstow insisted: “Look, I’m not saying I want everyone to come out and abuse me! By no means am I saying that.

“You’re going out every time to try to score a hundred. Sometimes it comes off, sometimes you nick one, sometimes it misses the stumps and goes for four and off you pop, you’re away and running.”

As for Roy’s return, Morgan said: “Having him back is a big confidence booster he’s very intimidating, hard to bowl to and he’s a gun player.”

Morgan also hailed the modest Woakes’ often unsung work by saying: “He is a guy who goes unnoticed but he’s an extremely valuable player for us and a great asset in the first 10 overs.”

Plunkett vindicated his recall with 3-55, a return Morgan said was “an outstanding effort from a very experienced player”.

England may have been the home team but the overwhelming majority of a 24,000 capacity crowd were wearing India colours and cheering for Virat Kohli’s side.

“It was a fantastic atmosphere,” said Bairstow. “We know the fanatical support the India team have.

“There are two ways you can go about it — you can either be intimidated by it or you can go and relish it and enjoy it.

“I think the experience of guys now playing around the world in different competitions, especially in the IPL (Indian Premier League), allows people to get used to the noise, definitely the noise, and enjoy how fanatical the Indian public are about our great game.” 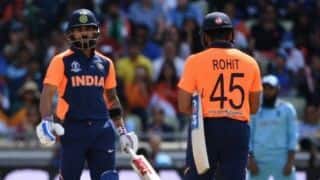