The Australian skipper also threw his weight behind his opening partner David Warner, who failed to score big at brisk pace against India.

Aaron Finch conceded that Australia gave away a lot of runs in the last ten overs after India sealed a 36-win at The Oval in London on Sunday.

Batting first, India posted 352 runs on the board. After Shikhar Dhawan, who scored a hundred, and Rohit Sharma laid a solid foundation with a 127-run opening stand, Virat Kohli, Hardik Pandya and MS Dhoni followed it up before KL Rahul capped off the innings with a three-ball eleven-run innings as India crossed the 350-run mark.

Australia conceded as many as 116 runs in the last ten overs as India went after their bowling. Finch said his team could have dried up runs before admitting that Australia was outplayed .

There wasn’t huge amount on offer (for the bowlers). We could have been straighter, dried up (runs) a little bit at times. They (India) bat very deep, you want to go for wickets. Just one of those games, they outplayed us, added Finch.

When asked whether he would change the team combination, Finch said that one has to take into consideration a few factors before making such decisions.

You look at everything (when asked if he would change change the combination). You assess the conditions; you look for different combinations and different balances over time.

Chasing the 353-run target, Australia were off to a slow start before Finch upped the ante, taking on Pandya in the 10th over of the innings.

However, he could not go on for too long after he was run out, going for a second run. Finch left the field fuming. Asked about his dismissal, he said, You are rubbing it in. You back your partners, I could have said no as well. We were starting to pick up the tempo; that’s one mode of dismissal.

While David Warner went on to score his second half-century from Australia s three games in World Cup 2019, the left-hander struggled to score at a brisk and got out after 84-ball 56-run knock.

Finch though threw his weight behind Warner and said that the India bowled well to keep him in check.

They bowled well to him. The wicket was a touch slow when we started to bat. He’s a great batsman; he’s a world-class player and he’ll bounce back, concluded Finch. 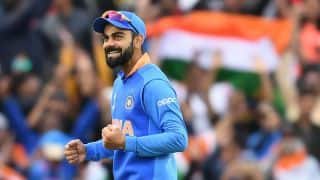 Cricket World Cup 2019: We wanted to beat Australia after they won against us at home - Virat Kohli 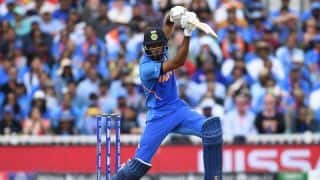