Cricket World Cup 2019: India vs Pakistan becomes the most tweeted about ODI on Twitter with 2.9 million t

Virat Kohli was the most Tweeted about player during the India versus Pakistan match in World Cup 2019.

India won by 89 runs in Manchester on Sunday to extend their unbeaten streak against Pakistan in the World Cup history.

While we saw the rivalry between both teams on the field, the roar of the fans was loud on Twitter. The game broke cricket records by becoming the most Tweeted about one day international (ODI) match generating 2.9 million Tweets.

While there was dialogue between both countries on the platform, when we compared official hashtags like #TeamIndia and #WeHaveWeWill, as well as the number of Tweets mentioning Indian cricketers and Pakistani cricketers, the Indian side dominated the conversation on Twitter. Most Tweeted About Players

The captain of #TeamIndia Virat Kohli (@ImVkohli), who also became the fastest player to achieve the milestone of 11,000 ODI runs, was the most Tweeted about player during the #INDvPAK match. Rohit Sharma (@ImRo45), thanks to his epic 24th century in ODI was the second on the list, followed by Pakistan captain, Sarfaraz Ahmed (@SarfarazA_54), all-rounder Shoaib Malik (@realshoaibmalik) and wicket-keeper MS Dhoni (@msdhoni).

Most Tweeted About Moments

Here are the most Tweeted about moments from #INDvPAK, basis the conversation peaks – Tweets per minute (TPM)

Fans love when their heroes perform on the field. A Tweet by @ImRo45 celebrating his 2nd century of #CWC19 became the most Retweeted Tweet from Sunday s match. 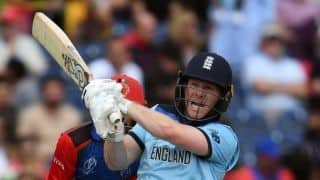