India beat Pakistan in Manchester by 89 runs and improved their unbeaten World Cup run against Pakistan to 7-0.

India beat Pakistan by 89 runs via the DLS method in Sunday’s World Cup showdown between the arch rivals in Manchester.

Here AFP Sport looks at the key aspects of a game that saw India improve their unbeaten World Cup run against Pakistan to 7-0.

Nobody ever dared to question Imran Khan’s decisions when he captained Pakistan during an illustrious career that ended with World Cup triumph in 1992.

But many wondered why the Prime Minister’s tweets were ignored by the current Pakistan side, led by Sarfraz Ahmed, after he advised the team to bat first if they won the toss at Old Trafford.

Imran sent out a series of messages on Twitter to convey that Pakistan should elect to bat unless there was moisture on the pitch.

Sarfaraz can take refuge in the fact that even India captain Virat Kohli admitted he would have bowled first had he won the toss.

But India’s total of 336 was too much for Pakistan to chase and the big loss that followed left everyone pondering over Imran’s advice.

India’s Rohit Sharma comes with a reputation of getting big hundreds and he did not disappoint with his second century of the tournament.

Sharma found excellent support from KL Rahul, who did not let India feel the absence of injured opener Shikhar Dhawan, as the duo put on 137 runs.

Sharma’s deft late cuts and some effortless hits, including a six at backward point off paceman Hasan Ali, brought back memories of the stroke-making of Sachin Tendulkar and Virender Sehwag.

He was finally out while trying a paddle shot over short fine leg, but his 140-run knock, laced with 14 fours and 3 sixes, had put India in pole position.

Amir holds his own

Mohammad Amir is a left-arm quick who has the responsibility of carrying a rich legacy of Pakistan pacemen.

Amir has more often than not delivered on the big stage and once again he carried Pakistan’s main threat against India with little support from the other end.

He bowled fast and swung the white ball to trouble the Indian batsmen despite getting warned twice for running on to the pitch early in his spell.

The 27-year-old, who spoke of taking inspiration from memories of his late mother who passed away in March, returned figures of 3-47 including skipper Virat Kohli’s prized scalp.

But the quick, who returned to the game after serving a four-year fixing ban in 2016, still ended up on the losing side.

But it was Yadav’s left-arm wrist spin that proved key in India flattening the Pakistan batting by taking down their two top batsmen.

He got Babar Azam bowled on a tossed up delivery around the off stump that turned sharply to rattle the stumps and deny the batsman his fifty.

Opener Fakhar Zaman was done in on another turner by Yadav, with fellow spinner Yuzvendra Chahal taking a simple catch at short fine leg.

Virat Kohli has often called his two wrist spinners “world class” and the 24-year-old Yadav justified his captain’s faith with figures of 2-32 from his nine overs.

Fans add to the spectacle

From 800,000 ticket applications for the Old Trafford showdown, 26,000 lucky fans from India and Pakistan filled the packed stadium and made the day their own with music and revelry.

Blue remained the dominant colour in the Sunday blockbuster as chants of ‘India, India’ reverberated in the air and the Indian tri-colour fluttered at every boundary and wicket.

But Pakistanis made their presence felt by cheering their team on with shouts of ‘long live Pakistan’.

The fan of the day was a Pakistani supporter who turned up at Old Trafford riding a white horse.

Even the intermittent spells of rain did not dampen the spirits of the raucous crowd that added to the spectacle of a rivalry that drew an estimated television audience of over one billion. 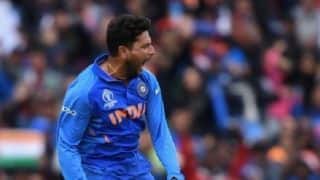