Ashwin also said India's spinning duo of Yuzvendra Chahal and Kuldeep Yadav have been doing well for a while now.

Out-of-favour India off-spinner Ravichandran Ashwin Tuesday said that Virat Kohli-led team would dominate the ongoing World Cup like Australia did in 2003 and 2007.

India have posted impressive wins in both their World Cup matches so far, against South Africa and Australia.

“…India will go on to dominate this World Cup like Australia did in 2003 and 2007,” the bowler said after launching the ‘Ashwin Foundation’, which aims to help young cricketers at his Gen-Next Cricket Institute.

The lanky Tamil Nadu cricketer said India’s spinning duo of Yuzvendra Chahal and Kuldeep Yadav have been doing well for a while now.

“Chahal and Kuldeep have been doing well for a while now. Chahal has performed well in the World Cup also,” he added.

On off-spinners not being preferred in the playing XI these days, Ashwin said that things would soon change.

“I think off spin is not very much (seen these days). The commodity in the game has changed. A lot of cricketers are right handers and requirement of left-arm spinners are lot more. But I think what goes comes around.

“Requirement of off-spinner in shortest format has become lesser but if you look at the IPL this year it was Harbhajan Singh and myself…I did not necessarily bowl offspin, it is perception and it will change, if you give can yourself a chance,” he said.

The 32-year-old informed that he would be leaving for England on June 23 to play for county side Nottinghamshire in the second half of the season. He had turned out for Worcestershire last time.

“I will be leaving for England on June 23 to play for English county team Nottinghamshire. Let us see how it goes.”

Meanwhile, Ashwin has handpicked eight youngsters who would be provided scholarship and kits on behalf of the foundation run by him and his wife Prithi.

“As a young cricketer I always felt infrastructure and coaching standards could be better and now I’m in a position to help impart state of the art coaching methodologies to kids who have the required skill sets but don’t have the financial aid to continue their dream of playing cricket,” he said.

The foundation would also aim to create awareness among trainees of Gen-Next Institute about the importance of eye donation and right to vote and safe driving. 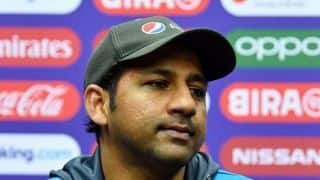 Video: Our morale is very high, not thinking about 5-0 series loss against Australia: Sarfaraz Ahmed