A request was made to the ICC to increase security keeping the safety and privacy of Indian players in mind, but the call hasn't been answered yet.

Disagreement between the International Cricket Council (ICC) and Team India‘s management over security arrangements for the Men in Blue in the ongoing World Cup isn’t new. Right from the word go, the team management has made its displeasure known and it has now come to the fore that requests from the Indian team to beef up security has fallen on deaf ears.

Speaking to IANS, sources in the know of developments said that after the invasion of privacy a few days back at the team hotel, there was another request made to the ICC to look into the matter and increase security keeping the safety and privacy of players in mind, but the call hasn’t been answered yet.

“There has been no addition in security even after there was a dialogue with the organisers over the behaviour of some fans at the team hotel a few days back. We did try to apprise them, but no changes yet,” the source said.

But when contacted, the ICC claimed otherwise and said that the safety of the players is of paramount importance and the necessary steps had been taken after a few unruly fans created a scene at the Indian team hotel.

“Cannot discuss security plans, but the designated team did make some changes to access to the team hotel to limit the number of non-guests coming in,” the official told IANS.

The source in the Indian team said that asking for security to be invisible wasn’t really a good move.

“As per the ICC regulations, security is needed to be invisible. But the exuberance surrounding the tournament is such that actual physical presence of security is the need of the hour considering the number of fans who are seen in and around the hotels where the Indian team stays,” the source pointed.

Even as the Indian team travelled from Birmingham to Leeds on Wednesday to prepare for their last group game against Sri Lanka at the Headingley Cricket Ground on Saturday, there were about 35-40 Indian fans waiting to click a selfie with the players or grab an autograph. 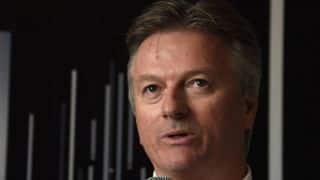 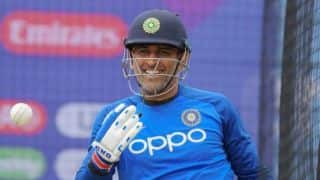