The Indian team's practise session on Friday was called off due to rain, leaving them one day to train ahead of showdown with Australia.

The Indian team’s practise session on Friday was called off due to rain, leaving the Virat Kohli-led side with only one day to train ahead of Sunday’s big-ticket World Cup showdown with Australia.

India travelled to London from Southampton on Thursday, a day after beating South Africa by six wickets in their tournament opener.

Rain had also forced India to cancel their optional practise on the eve of the game against South Africa at the Hampshire Bowl.

The two-time winners face a formidable opponent in defending champions Australia, who are on a 10-match winning streak, which began in India only where they overcame a 0-2 deficit to win the five-match series 3-2. 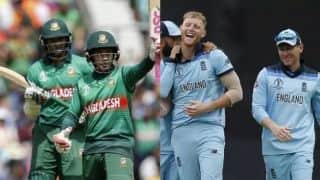