To negate the threat of a hostile reception from England fans, Smith has also taken up the guitar and has been practicing on Australia's team bus during their road trips.

Captain Aaron Finch began the ICC World Cup 2019 on a positive note with Australia humbling Afghanistan by seven wickets at the County Ground in Bristol on Saturday. If Australia do manage to defend the title and clinch a record sixth World Cup, it will be a massive feather on Finch s hat, but assistant coach Brad Haddin believes that he cannot do it alone.

Steve Smith and David Warner, who have both held leadership roles before but were suspended in the aftermath of the ball-tampering scandal, return to the side after almost a year. Smith has been barred from holding any official leadership position until next year while an indefinite ban on leadership has been imposed on Warner.

“Aaron s got a very good cricket brain first and foremost, but there s always times in a game when you go to your senior players,” Haddin was quoted as saying by cricket.com.au on Monday.

“Sometimes you get caught up in the moment and you can miss little things, so it is important that all your senior players are there to support your captain. (ALSO READ: Everyone’s handling it really well: Adam Zampa on hostile fans)

“Smithy and Davey are no different. They’ve got great cricket brains so at certain times in matches you d be silly not to use them.”

Warner returned to ODI in style as his unbeaten 89 paved the way to the easy run-chase against Afghanistan. Smith missed out on cashing the opportunity and was visibly peeved when he departed for 18.

“I think Steve s just really excited to be back batting,” Haddin said.

“It s never been an issue with the leadership or the captaincy. Both Steve and David are just really excited to be back playing international cricket. They re just excited to be out there. Whatever role you give them they ll be happy at the moment.”

To negate the threat of a hostile reception from England fans, Smith has also taken up the guitar and has been practicing on Australia’s team bus during their road trips between cities. “He’s been great around the team and great for me as well,” Finch said. (ALSO READ: Australia have high hopes of Steve Smith)

“I think he’s got a bit more spare time on his hands. He gets bored pretty easy. That is why he is training for hours on end – he doesn’t like it when he is told he can’t train for the day.

“When you are the captain, there is a bit more stuff that occupies your time at various times, but he’s been brilliant around the boys.

“He’s been great for me, talking cricket, talking batting, things like that and lessons he’s learnt from being captain and leading the team.” 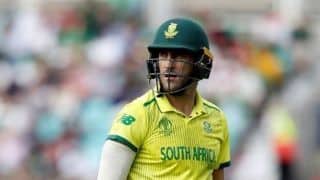 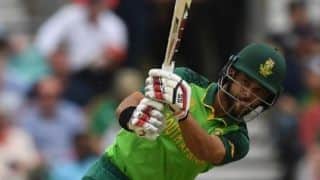 Cricket World Cup 2019 - India have a lot of match winners, they're a big threat: JP Duminy