Kohli is impressed with the newly-designed orange-dominated "away" jersey of the Indian team.

BIRMINGHAM: Virat Kohli unveiled India‘s away jersey for the game which the team will be sporting ahead of their clash against hosts England at Edgbaston on Sunday. The new jersey – a one-time thing – is a combination of orange and dark blue received a big thumps up from Kohli, who rated it a good eight out of 10.

“I quite like it. For me, it’s right up there. For me, it would be an 8. Honestly, I’m not saying it for the sake of it. I really like it because it looks nice. The contrast is really nice. So I quite like it. The fit is great. It’s a nice change,” Kohli said on the eve of the match.

The concept of a home and away kit is usually used in football, but the idea of India putting on a different jersey was to differentiate themselves from England, whose kit sports a light shade of blue. The choice of orange has caused a stir in India with some opposition accusing Prime Minister Narendra Modi government of pushing BJP’s trademark saffron hue on the team.

In the World Cup, four teams have tried out different combinations to look avoid looking like the opposition. Afghanistan’s blue was replaced by red in three matches, South Africa sported gold for two and Sri Lanka added shades of yellow for a couple of game. Bangladesh are also expected to use a red jersey for their game against Pakistan on Friday.

The use of orange is not new for India in their jersey. In 2009, the light blue was replaced by dark blue with shades or orange. Kohli personally looked extremely satisfied with the kit, reckoning it’s a good break from the usual blue.

“For one game, it’s fine. I don’t think permanently we’ll be heading in that direction because blue has always been our colour, and we’re very proud to wear that. Yeah, for a change and looking at the occasion, I think it’s a very, very smart kit.”

The unveiling of the kit wasn’t the only thing different about India’s pre-match press conference. Usually the player addressing the PC is introduced by the team’s media manager, but on Saturday, Kohli walked inside the room alongside a young kid, who took the mic and introduced the India captain to the media.

“Hello everyone. We’re the Playground Pundits, and we’re taking over tomorrow’s match to help raise money for children. I’m Edward, and I’ll be your media manager for today. I’m very excited to introduce India’s captain Virat Kohli,” said the kid.

Two more kids were seated in the front row, of which one was a little girl named Neha. She asked the first question to kick off the press conference greeted by a round of applause from everyone in the room.

“Hi, Virat. I’m Neha. Are you and the Indian team excited for tomorrow’s match?”

“Yes, Neha. Thank you for the lovely question. We are excited. It’s a very special occasion, the first time that it’s been done, and we’re very proud that we’re a part of such a special game, and we’re very excited, and I hope all of you are excited to watch as well,” Kohli answered.

The participation of young kids was in relation to an initiative called “OneDay4Children”. which is about celebrating children and fundraising to help children around the world live happy and healthy lives. As such, children will be in the driving seat of OD4C, throughout this week and on Sunday’s match day between England and India at Edgbaston. 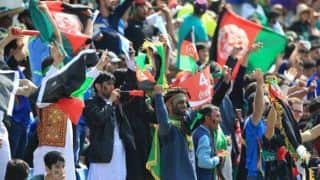