Jasprit Bumrah holds the key to India’s success at the World Cup, but ‘freak’ David Warner can do it for Australia: Michael Clarke

Jasprit Bumrah holds the key to India’s success at the World Cup, but ‘freak’ David Warner can do it for A

One of the most delightful batsmen to have played the game, Clarke is in awe of the legend of Bumrah which has been on the upswing for two years now.

The former Aussie skipper Clarke explained why India and Australia are top three contenders while making it clear that the coveted Cup may not “come home” for the hosts contrary to what the likes of Kevin Pietersen and Michael Vaughan are wishing.

One of the most delightful batsmen to have played the game, Clarke is in awe of the legend of Bumrah which has been on the upswing for two years now.

“I think there is nothing that he (Bumrah) doesn’t have. He is fit and healthy. I hope he stays that way as he would play a big part in India’s success in this World Cup,” Clarke observed.

But Bumrah will face quite a challenge from Australia, especially Warner, who has already scored 447 runs in six games with two hundreds.

“I did expect an exceptional performance from David because he is an exceptional player. He is a freak. He is the X-factor in this team. If Australia go on to win the World Cup, David Warner will be the highest run-getter in my opinion,” opined Clarke and then went on to separately analyse what made the two individuals special. (ALSO READ: World Cup semi-final scenario: Pakistan stay alive, England vs Australia at Lord’s key to shaping top four)

Questioned as to what makes Bumrah such a difficult proposition for batsmen, Clarke elaborated, “With the brand new ball, he can swing and seam it. When the ball is doing nothing in the middle overs, he has the extra pace to trouble batsmen.”

“He can bowl close to 150 clicks and then at the death, he bowls those yorkers as good as anyone else. And if there is reverse swing, he is a genius,” the former Australian captain summed up the Indian pace spearhead in a nutshell.

Virat Kohli or for that matter no captain could have asked for a better ‘Go To’ option than Bumrah, according to Clarke.

“As a captain, probably, you need someone like him to throw the ball to when you need wickets. He can open the bowling, bowl that 35th over when nothing is happening or bowl those last four overs at the death, which can win India a World Cup final,” said the veteran of 115 Tests and 245 ODIs.

Would Bumrah been as good as Wasim Akram had there been just one new ball instead of two? “I think he would have. He is that good that he would have found out ways to adapt,” the former Australian skipper said.

Nothing makes Clarke more happier than to see Warner in prime form putting all the controversies behind him.

Warner was roundly criticised for his slow batting against India but that is the approach which is now giving Australia a real chance against a lot of other teams.

“ODI is different from T20s and it has taken him a bit of time to get back into ODI format. He has been patient at the start of his innings.

“People are saying David Warner is not at his best. But he has had two scores of 150. That shows how good a player he is, and he is now the leading run-scorer in the tournament,” Clarke looked excited and happy speaking about his former teammate. (ALSO READ: Virat Kohli, Jasprit Bumrah to be rested for West Indies ODIs and T20Is)

“David has probably played a little bit differently to what everybody expected at the start of the World Cup. But he has played smart. He has batted for a period of time. Remember before he got back into ODI cricket, he was back in T20 cricket after a 12-month lay-off.”

As far as captaincy is concerned, Aaron Finch’s leadership has been “impressive” according to Clarke, who lauded Kohli for using two wrist spinners, which he termed both “positive and aggressive”.

“India is a very skilful team and I think they have made the right decision in going in with two wrist spinners. That’s the aggressive approach and that probably made the difference with two-wicket taking bowlers in those middle overs.

“Virat’s captaincy has been very good so far in the tournament. They are playing unbelievable cricket at the moment,” said Clarke, who has always rated the Indian captain highly.

What is working for Finch at the moment is his own form which has been superb. The Australian skipper is fourth in the run-getters’ list with 396 runs that includes a hundred and three half-centuries.

“I think he is continuously getting better. He has been exceptional with the bat. It always takes away a bit of pressure from leadership when you are scoring runs. He has used his bowlers well.”

The Australian humour comes out when asked if he, like the England fans, thought that the “Cup is coming home”.

“Well, I am not sure if everyone was thinking that. I know Kevin Pietersen and Michael Vaughan were thinking that. I wonder if they will change their mind now. It’s still a long way to go,” he grinned.

“We will find out how good an ODI team England are now because they will probably need to win 2 out of the next 3 games and they have got Australia, India and New Zealand to play.

“If they do it and go on to win the World Cup, it will be a fantastic achievement. I would be commentating on the June 25th game (England vs Australia) at Lord’s. I can’t wait for that game to begin,” he said. 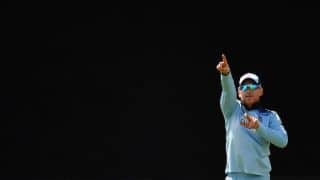