Bumrah is one bowler who can do damage at any stage of the innings: Kohli

Bumrah is one bowler who can do damage at any stage of the innings: Kohli

Bumrah, who won the Man of the Match award for his game-changing penultimate over, was happy to fulfil his captain s wish.

Mohammed Shami hogged the limelight for picking his first ODI hat-trick, but it was Jasprit Bumrah, who set the stage conceding just five runs in the penultimate over the Afghanistan run-chase that helped India to an edge-of-the-seat 11-run win in Match 28 of the ICC World Cup 2019 at The Rose Bowl in Southampton on Saturday.

Defending 16 runs in the final over, Shami first sent the danger man Mohammad Nabi, who departed for a valiant 52 and then gave marching orders to Aftab Alam and Mujeeb Ur Rahman to complete his hat-trick and the Afghanistan innings.

Bumrah, who returned with exceptional figures of 2/39 in his 10 overs, received lavish praise from captain Virat Kohli.

It s simple, we wanted to use him (Bumrah) smartly when the conditions allow him to. He gets a longer spell and because he can pick wickets in the spell he can get you quick wickets. He is the bowler who can do the damage at any stage of the innings and the opposition knows that as well. The communication was to finish him off at 49th over so that Shami has enough runs to defend in the last over and yeah the plan worked really well today, Kohli said at the post-match presentation ceremony.

Shami, who returned with exquisite figures of 4/40 in 9.5 overs, too came under tremendous amount of praise from Kohli. All in all, the bowling performance was outstanding. Everyone’s waiting for an opportunity and I think Shami was really good today and especially his first spell, he was making the ball do more than anyone else today, he said.

Bumrah, who won the Man of the Match award for his game-changing penultimate over, was happy to fulfil his captain s wish.

That gives you a lot of confidence, if the captain has so much of trust in you, that gives you a lot of confidence to trust yourself and clear my head in terms of how I want to execute. We saw that wicket was getting slower and slower with the older ball, you need to be more accurate and bowl stump to stump. This is a big ground and there was reverse swing, but you need to rely on your yorkers as well and play according to the situation. It was a tight game and I backed my skills, he said.

Sometimes when you run behind wickets, you don’t get wickets. We wanted to create pressure and take the run rate high. As soon as the required rate gets high, you get wickets. Gives us healthy competition in the side and we (bowlers) all discuss as what to do and how things are going. It’s a good sign when everyone is chipping in with the wickets.

Afghanistan captain Gulbadin Naib too admitted Bumrah s overs tilted the match in India s favour. We know India have a strong batting line-up, but Bumrah was superb at the death specially in the last two, three overs, he said. 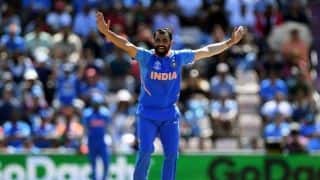