Archer was included in a 15-man squad announced having only qualified for the World Cup hosts and favourites on residency grounds in March.

Barbados-born fast bowler Archer was included in a 15-man squad announced on the back of a mere three one-day internationals, having only qualified for the World Cup hosts and favourites on residency grounds in March.

But the 24-year-old, whose father is English, has already faced many of the world’s leading cricketers while playing for the Rajasthan Royals in the Indian Premier League (IPL 2019).

And the Sussex quick had no problems in naming some of the best batsmen in the game as his World Cup targets. “I’d quite like to get Virat Kohli out because I wasn’t able to in the IPL,” Archer told Sky Sports on Tuesday.

And for all his lack of England experience, Archer believes the time he has spent in the IPL has been good preparation for the pressure of a World Cup. “I think I probably have a bigger advantage over some of the other guys in our team,” he said.

“We play (these guys) twice a (season) in the IPL, so you know their weaknesses, you know their strengths, you know if they can’t run between the wickets… it gets you an extra bit of inside information.”

He added: “To be honest, I think international cricket is probably the same intensity as the IPL. I think the only thing that changes is the amount of overs (the IPL is a Twenty20 competition).”

With this year’s 10-team 50-over World Cup an all-play-all affair in the group phase, England are set to face the West Indies at Southampton on June 14 and India at Edgbaston on June 30.

But for all the threat posed by the likes of Gayle and Kohli, Archer was in no doubt about the most difficult batsman he had bowled at Rajasthan and England teammate Jos Buttler. “The best player I faced was Jos Buttler in the nets.

“He is a 360 (degree) cricketer. He can hit you straight down the ground or over the ‘keeper’s head. I don’t think anywhere is safe with him.”

Earlier this month, former England captain Michael Vaughan said he would be “staggered” if Archer played no part in the home Ashes series against Australia that follows the World Cup, even though the 90 mph (145 kmh) speed merchant has yet to make his Test debut.

But Archer said of his Test chances: “If they do (select me) I would be over the moon but right now there is a World Cup to think about. I’ve only just got into the side and I don’t expect to be selected straight away for the Test team.” 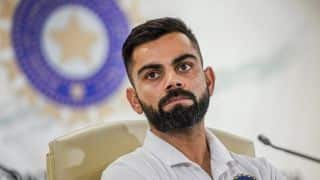