Jos Buttler is "responding well" to treatment on a hip injury but the star batsman still has to prove his fitness in time for Friday's match against West Indies.

England‘s Jos Buttler is “responding well” to treatment on a hip injury but the star batsman still has to prove his fitness in time for Friday’s World Cup match against the West Indies.

Buttler suffered a heavily bruised right hip while hitting a six during England’s 106-run win over Bangladesh on Saturday. The 28-year-old, one of the World Cup’s most destructive batsmen, was visibly hampered for the remainder of his innings of 64 in Cardiff.

Jonny Bairstow took over Buttler’s wicket-keeping duties when he was unable to come out for the Bangladesh run-chase. “Jos sustained heavy bruising on his right hip during the match against Bangladesh,” a statement from the England and Wales Cricket Board said on Monday. “He is responding well to treatment and will be reassessed later this week.”

The England squad reconvene on Wednesday for two days of practice in Southampton, with Buttler hoping to take part to show he is ready for the hosts’ fourth group game against the West Indies. “We anticipate he will train with the rest of the squad at the Hampshire Bowl on Wednesday ahead of the match against West Indies on Friday,” the statement said.

England captain Eoin Morgan suggested after the Bangladesh match that there would be no temptation to gamble with Buttler’s fitness with so many matches still to play. Tournament favourites England have won two of their first three group matches as the hosts bid to win the World Cup for the first time. “We’ll use every day as much as we can to try to get him back on the park, but if he is a risk going into the next game, it might not be worth it,” Morgan said. Cricket World Cup 2019: Wins, not respect, is what Mashrafe Mortaza and Bangladesh are chasing 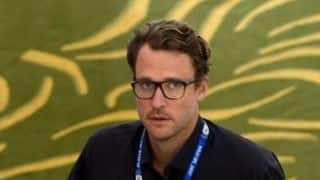 India world’s best team but New Zealand won’t be defined by performance against them: Daniel Vettori