Cricket World Cup 2019: Judge this Indian bowling attack with rivals of this generation only: Sachin Tendulkar

Cricket World Cup 2019: Judge this Indian bowling attack with rivals of this generation only: Sachin Tendu

For Tendulkar, who was part of two of three finals that India played, the change of rules makes it difficult to compare generations.

Led by Jasprit Bumrah, the Indian attack is the “most complete” of this era but it must not be compared with the bowling units of 2003 and 2011 when the team reached the World Cup finals, reckons Sachin Tendulkar.

If at all a comparison has to be made, then the current bowling unit should be compared with the attacks of this era, he insisted.

Tendulkar, who played six World Cups between 1992 and 2011 and has seen different bowling attacks led by Kapil Dev, Javagal Srinath, Zaheer Khan from close quarters, finds it unacceptable that different generations playing under different rules are compared with each other.

“I don’t like comparisons as those were different eras, where different teams played on different surfaces under different set of rules,” Tendulkar said when asked to compare the current unit with the attacks of 2003 and 2011.

For the maestro, who was part of two of three finals that India played, the change of rules makes it difficult to compare generations.

“We have two new balls and fielding restrictions in place (four fielders outside 30-yard circle between overs 11 and 40 and one more in the last 10 overs), it is like 100m runners are now running 90m or 80m because laws have changed.

“It is difficult for bowlers with no reverse swing which single new ball offered. So, if you want to judge the current Indian attack, they should be judged with rival attacks of this generation only. But yes, when it comes to this era, this is a very good attack,” said Tendulkar.

“However, I can’t take away anything from the contributions made by the bowling attacks of 2003 and 2011 World Cup campaign. In 2003, that bowling attack (Srinath, Zaheer, Nehra and Harbhajan) took us to the final while we did one better in 2011 (Zaheer, Nehra, Harbhajan, Munaf Patel and Yuvraj Singh).”

However, with the world’s premier pacer Bumrah in its rank, this attack is as good as it can get, said Tendulkar.

“What’s the best thing about this attack is the fact that they are on top of their game. It is the most complete in this era. Bumrah has been world’s no 1 bowler in this format for some time now. He has been our ‘go to man’ providing crucial breakthroughs whenever needed.

“Also, the two wrist spinners (Kuldeep Yadav and Yuzevendra Chahal) operating in tandem during middle overs will be crucial as we are expected to get more wickets in that phase. So overall, it’s a very good attack of this era,” said Tendulkar. 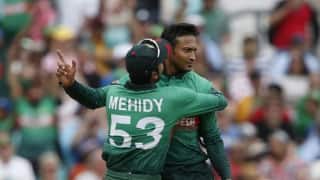