According to www.cricket.com.au, Smith played a shot off Nathan Coulter-Nile that Langer said "was like watching Sachin (Tendulkar) bat".

Smith, returning to the fold after the ball tampering incident kept him and David Warner away from the game for one year, was in good nick as he spared no bowler at the Whitgift School in London’s south.

According to www.cricket.com.au, Smith played a shot off Nathan Coulter-Nile that Langer said “was like watching Sachin (Tendulkar) bat”.

“(I) watched Steve Smith batting against New Zealand in those three practice games, he’s literally a master of the game, so it’s nice to have him back,” Langer was quoted as saying by www.cricket.com.au.

“It’s been hilarious for me, because whether on the Anzac Cove or in the lunch room or we’re on the bus playing cards, he’s just shadow batting the whole time.

“Dave’s got that look in his eye, he’s really hungry, he’s a great player as we all know, he’s so dynamic, he brings so much energy, and that’s what we ask from our players.

“They’ve had 12 months to have a good think about a mistake they and the team made. I’m sure they’ll be better people for that.”

Langer asked for patience in terms of expecting the best from Smith and Warner as the World Cup draws nearer. Defending champions Australia take on Afghanistan in their opener on June 1.

“Steve’s in literally career best shape and Dave Warner is always elite fit,” said Langer. “In terms of their throwing they’re building it up.

“Where they’ve come from, from surgery, I’m really proud of them and they’re up and running.

“Are they going to throw like Andrew Symonds or Ricky Ponting? Probably not at the moment but they’re certainly working towards that.” 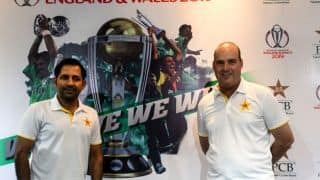 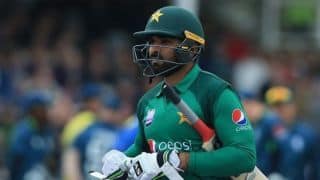