New Zealand lost three wickets for 27 runs before Mitchell Santner and Lockie Ferguson saw them to a victory achieved with 17 balls to spare.

Kane Williamson was not too pleased with New Zealand s batting department despite their edgy two-wicket win over Bangladesh in Match 9 of the ICC World Cup 2019 at the Kennington Oval in London on Wednesday.

The Black Caps, losing finalists four years ago, achieved a seemingly modest target of 245 thanks mainly to Ross Taylor’s 82. But they lost three wickets for 27 runs before Mitchell Santner (17 not out) and Lockie Ferguson (four not out) saw them to a victory achieved with 17 balls to spare.

The fielding was brilliant throughout by both teams. We thought 250 could be a competitive score and we just needed to keep wickets in the hand. It wasn’t a clinical effort with the bat, but it was nice to get over the line. There were a few soft dismissals that we need to address, Williamson said at the post-match presentation ceremony.

Elaborating on one of thrilling finish, Williamson said: It was a great experience to have and these things happen and they go down the wire. It was nice to hold on as momentum shifts tend to happen in tournament cricket.

I thought all the guys adopted to their role very well. We were expecting a lot more pace, but it was on the slower side. Both teams had a similar kind of a approach today. It was one of those surfaces that produces great cricket. The guys on the sidelines who have a couple of niggles are improving, while the guys on the park are doing their job as well. Cricket World Cup 2019: We need to work on our running between the wickets: Ross Taylor 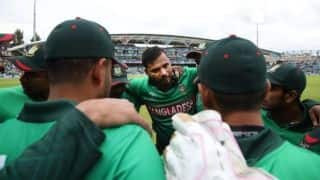