Having lost five of their seven matches, South Africa are already out of the semi-final contention but Sri Lanka need to win this contest to keep their last-four hopes alive.

South Africa have made two changes to their Playing XIs, dropping Lungi Ngidi and David Miller and replacing them with Dwaine Pretorius and allrounder JP Duminy. Sri Lanka have made one change – Suranga Lakmal replaces Nuwan Pradeep.

“It’s fresh pitch, hoping to get some seam movement, doesn’t spin too much in the second innings. We are playing an extra batsman today and hopefully that allows our batters to bat more freely,” Du Plessis said at the toss.

Sri Lanka captain Dimuth Karunaratne said, “We just want to win this match and see how the next two games unfold.” 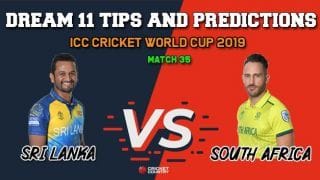 We are still learning, young guys have a great future ahead: Kemar Roach