India occupy the fourth spot with 7 points from four games.

England were all but out of the match after slumping to 186-9 as they chased 233 for victory.

Ben Stokes’ blistering 82 not out off 89 balls, including seven fours and fours sixes, got them to within sight of their target. But Stokes’ gamble on giving Durham team-mate Mark Wood a ball to face at the end of a Nuwan Pradeep over backfired when the No.11 was caught behind as Sri Lanka won with three overs to spare.

Victory would have seen hosts England, bidding to win the World Cup for the first time, go top of the 10-team table. But instead their second surprise loss of the round-robin group stage after a 14-run defeat by Pakistan, left them in third place, with Sri Lanka now just two points adrift of the pre-tournament favourites. (FULL POINTS TABLE)

The top four at the end of the first phase qualify for the semi-finals, with England’s next match against arch rivals Australia the table-toppers and reigning champions at Lord’s on Tuesday now even more important to their hopes of a last four place.

India occupy the fourth spot with 7 points from four games. Virat Kohli and Co. next face bottom dwellers Afghanistan in a bid to seal the semi-final spot. 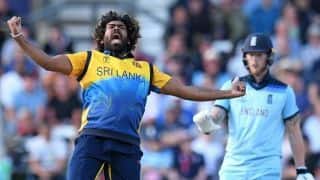 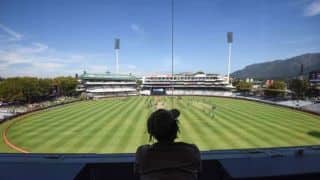