Joe Root starred with the bat and ball, scoring an unbeaten hundred and scalping two wickets, while Jofra Archer and Mark Wood scalped three wickets each as England beat West Indies by eight wickets in the 19th match of the ICC Cricket World Cup 2019 at The Rose Bowl in Southampton on Friday.

While England were left to deal with some injury concerns in the form of Jason Roy and skipper Eoin Morgan, that did not deter the team from registering their third win in the ongoing World Cup.

With this win, England jumped to the second spot in the points table. West Indies, meanwhile, after suffering their second defeat are now placed on the sixth place with three points against their name.

While Nicholas Pooran scored 63, none of the other West Indian batsmen failed to go past fifty as England, after electing to bowl, bowled out West Indies for 212.

Root, who opened the batting with Joony Bairstow following Roy’s injury, made sure that England did not have any early wobbles in the chase as the two put up a 95-run stand before the latter got out. Root though went on to bring his second hundred in the World Cup 2019 as England cross the finish line with 16.5 overs to spare.

While Australia too have three games, England are ahead of them in the points table on the basis of a better net run-rate. India, with five points, are on the fourth spot in the table with two wins from three games, with one game fetching no result. New Zealand, meanwhile, are occupying the top spot with seven points against their name. 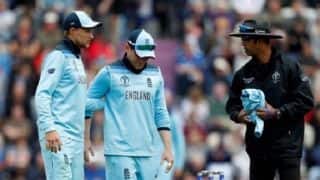