With the 11 points, India are now almost through and another win in their next three games will seal their position in the top four.

India maintained their unbeaten streak in the ICC Cricket World Cup 2019 after a thumping 125-run win against West Indies in Match 34 at Old Trafford in Manchester on Thursday.

With the 11 points, India are now almost through and another win in their next three games will seal their position in the top four as West Indies were knocked out with two games remaining.

India have moved to the second position after winning all their six games so far and sit just below defending champions Australia, who have 12 points from 7 games. The only game they lost to was against Virat Kohli and Co. (CHECK OUT: FULL POINTS TABLE)

Meanwhile, it s curtains for West Indies campaign in the tournament having lost their fifth match in 7 matches, which puts them on eighth spot in the 10-team table below out of contention South Africa and Afghanistan.

While India and Australia have more or less sealed the semis spot, Pakistan s crushing win against New Zealand on June 26 has thrown the World Cup wide open. Five teams hosts England, Pakistan, New Zealand, Sri Lanka and Bangladesh battle it out for the next two spots. All the teams have to win their remaining games to stand an outside chance of qualifying. 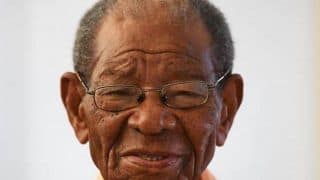