New Zealand and India remain the only two who are yet to lose a game in the World Cup 2019.

Carlos Brathwaite almost pulled off a heist, scoring a hundred to bring West Indies tantalinsgly closer to a stunning win but New Zealand managed to seal a five-run win over West Indies.

Kane Williamson led from the front and Trent Boult scalped four wickets and helped New Zealand register their fifth win in ICC Cricket World Cup 2019 on Saturday at Old Trafford in Manchester. With this win the Kiwis moved to the top spot in the points table.

While New Zealand continued their unbeaten streak, West Indies suffered their fourth defeat in the ongoing World Cup. New Zealand have, so far, played six games, one of which, against India, was a washout.

Earlier, Mohammed Shami took a dramatic hat-trick to finally clinch India’s thrilling 11-run win over Afghanistan after the Gulbadin Naib-led side threatened one of the biggest shocks in World Cup history in Southampton on Saturday.

Afghanistan, appearing at only their second World Cup, lost the toss but restricted India to 224 for eight in their 50 overs, giving themselves a genuine chance for a huge upset.

They were well set at 106-2 in the 29th over, even though the run-rate was starting to edge up, but two wickets in one over from paceman Jasprit Bumrah removed Rahmat Shah and Hashmatullah Shahidi.

India remain unbeaten in the World Cup, now moving to third on the points table. Afghanistan stay winless with their sixth loss in a row, but will have won hearts for their determined efforts to defeat India.

Australia and England are meanwhile occupying the second and fourth spot respectively in the points table. 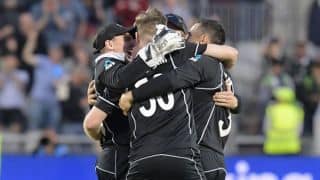 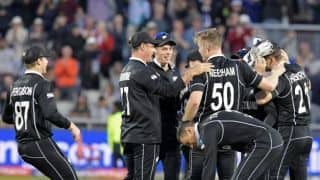