South Africa will open their World Cup campaign against hosts England on May 30 at the Oval and Ngidi said they would want to send a statement to the hot favourites.

South Africa fast bowler Lungi Ngidi wants to set the record straight against India in the upcoming ICC World Cup 2019, saying his team “owes one” to the Virat Kohli-led side following its ODI series loss at home. Visitors India had sealed a comprehensive 5-1 win over South Africa last year.

The Proteas were missing some key players in skipper Faf du Plessis, AB de Villiers and Quinton de Kock during that series and Ngidi believes a full-strength team will be able to return the favour when they clash with India on June 5 at Southampton. “I believe we owe them one,” the 23-year-old said.

“I’m looking forward to India. When they came here, they had a good series against us. So, in my mind, I believe we owe them one. It would be a very exciting game for me. I’m sure it will be for all the guys as well.

“They’re a great team, don’t take that away from them. But when they had a good series here, we were missing a few players. With those guys back, we’ll see how it evens out a bit,” added the 23-year-old.

South Africa have never won the World Cup and Ngidi said it would be a dream come true if he can help the side to victory. “Since I started this journey in international cricket, it’s something that was always brought to my attention: that there’s a World cup coming, and am I looking to be within that squad?

“And now I’m here, and there’s no turning back. Nothing but excitement going there, and it would be a dream come true to win that World Cup and bring it back to South African soil.”

South Africa will open their World Cup campaign against hosts England on May 30 at the Oval and Ngidi said they would want to send a statement to the hot favourites.

“We are well-aware that they are probably under a lot more pressure than we are,” said Ngidi, who has picked up 34 ODI wickets at an average of 21.64.

“They are hosts, they’re considered to be favourites and that’s an advantage for us. We obviously want to win, and if we do, it would send a massive statement.” 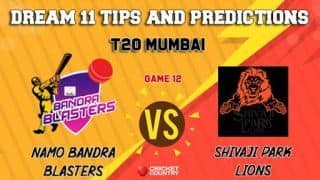