South Africa fielded an unchanged side in match 30 of the World Cup.

LONDON: On a fresh pitch wearing the slightest tinge of green, Pakistan captain Sarfaraz Ahmed has won the toss and decided to bat against South Africa on Sunday as the first match of the ICC Cricket World Cup 2019 at Lord’s got underway.

Six days since their last game, which was the loss to India at Old Trafford, Pakistan made two changes: Shoaib Malik was dropped, after two consecutive ducks, and replaced by Haris Sohail while Shaheen Shah Afridi took Hasan Ali’s place. Could Malik have played his last World Cup game ever?

South Africa played an unchanged side from the one that narrowly lost to New Zealand in Birmingham.

With only three points from six games, South Africa are all but out of the tournament while Pakistan could still make into the semi-finals, provided they win their remaining four games and other results go in their favour. 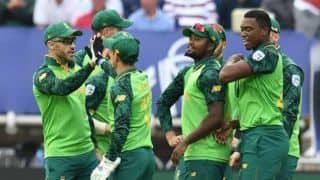 India got a bit stuck in the middle overs, should have played a little bit more freely: Krishnamachari Srikkanth