Wood suffered discomfort in his left ankle after England's win over Bangladesh in Cardiff on Saturday.

England fast bowler Mark Wood could miss the ICC World Cup 2019 match against the West Indies in Southampton on Friday following a recurrence of his longstanding ankle problems.

Wood suffered discomfort in his left ankle after England’s win over Bangladesh in Cardiff on Saturday, when the Durham quick recorded the fastest delivery of the tournament so far at 95.6 mph (153.9 kmh).

The 29-year-old, who revived his England career with some fiery spells during this year’s tour of the West Indies, has undergone three major operations on his ankle. He experienced further problems on the eve of the World Cup, pulling out of a warm-up game against Australia. (PREVIEW: Battle of pacers on the cards as England-West Indies renew rivalry)

England captain Eoin Morgan said Wood’s latest injury problem did not mean he was facing the end of his World Cup. “It’s nothing too serious, he just pulled up a little bit sore from the game in Cardiff he s the only concern at the moment,” Morgan said on Thursday.

“Mark is going to have a fitness test in the morning. If it is still sore, we probably won’t take a risk.”

Morgan said all teams at the World Cup would need to look after their quicks in particular. “It’s part of the plan, because they are fast bowlers. It will happen to other bowlers throughout the tournament,” he said.

“We’re well aware of that. We will have to manage them as we would normally, as we do with Chris Woakes if there’s back-to-back games,” Morgan added. “It’s not a problem, it’s just what happens.”

Wood’s place could go to Moeen Ali, who did not play against Bangladesh, should England again decide to play a second specialist spinner alongside leg-break bowler Adil Rashid. (ALSO READ: I don’t think rain will be the reason England don’t make the semi-finals: Morgan)

Moeen’s wife gave birth to a daughter on Wednesday but the off-spinner was back with the England squad on Thursday.

Morgan confirmed that the big-hitting Jos Buttler had been cleared to play, and keep wicket, after sitting out the Bangladesh innings with a right hip problem. 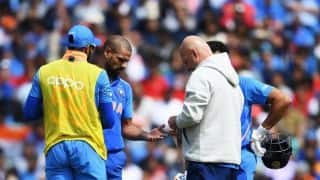 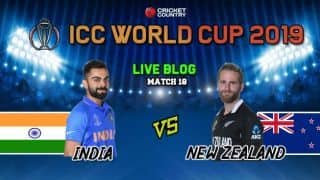