Kane Williamson and Co outplayed Sri Lanka and kicked off their World Cup 2019 campaign with a ten-wicket win.

Sri Lankans batsmen came a cropper as New Zealand steamrolled the Island nation to kick off their ICC Cricket World Cup 2019 campaign with a convincing ten-wicket win at the Sophia Gardens in Cardiff on Saturday.

Electing to bowl, the Kane Williamson-led unit bowled out Sri Lanka for 136, with Matt Henry and Lockie Ferguson scalping three wickets each.

Henry set the ball rolling for New Zealand in the first over after dismissing Lahiru Thirimanne on the second delivery before adding the wickets of Kusal Perera and Kusal Mendis against his name. The right-arm pacer won the Man of the Match award for his match-winning performance.

Henry said he was happy to see to bowl on a green surface and highlighted the Kiwi bowlers went about their business. (Cricket World Cup: New Zealand vs Sri Lanka: AS IT HAPPENED)

It was good to get a green surface and we tried to make the most of it. We don’t get many one day wickets like that, but it’s nice when you get one. It is just important you go through your processes and try a few things, not try and worry too much as it is a long tournament, said Henry.

On a surface like that we were trying the full length and get them forward, with them trying to hit us off our length. You make sure you keep coming in with your plans and hope that the plans would work, he added. (ALSO READ: Cricket World Cup 2019: Dimuth Karunaratne becomes second batsman to carry his bat through the innings in World Cup)

While the bowlers dominated the show for New Zealand, their fielding too was a top notch, including the one from Martin Guptill to dismiss Mendis. Henry highlighted the importance of fielding well.

Makes a massive difference when the fielders do their job; they were brilliant today and it means a lot for our bowling attack, said Henry.

I really enjoyed my time at Kent last year, we had a lot of success with the white and the red ball. Always nice to come back here, he concluded. 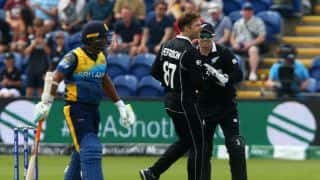 Cricket World Cup 2019: I like challenges. I like to think that my captain can give me a ball in any situation: Imran Tahir