MS was trying really hard to get the boundary, but it wasn't coming off: Kohli defends Dhoni-Jadhav partnership

MS was trying really hard to get the boundary, but it wasn't coming off: Kohli defends Dhoni-Jadhav partne

Kohli, who missed out on scoring a century after notching up yet another half-century, was critical of his batting department.

India s unbeaten run at the ICC Cricket World Cup 2019 ended after a 31-run defeat to hosts England at Edgbaston in Birmingham on Sunday. With the win, England have moved ahead of Pakistan at No. 4 in the points table with 10 points from eight matches. India remain at No. 2 with 11 points but have a match in hand.

Chasing 338, India lost KL Rahul for a nine-ball duck. A 138-run partnership for the second wicket between Rohit Sharma (102) and captain Virat Kohli (66) brought India back into the contest but after the duo were back in the shed, the intent was missing from the middle-order.

India added just 39 runs in final five overs as they finished 306 for 5 in 50 overs chasing 338. MS Dhoni and Kedar Jadhav s approach was baffling as the duo were dealing only in singles.

It’s up to discussions with the two guys who were in there. I think MS was trying really hard to get the boundary, but it wasn’t coming off. They bowled in good areas and the ball was stopping, hence it was difficult to bat towards the end. We have to sit and assess and improve on things in the next game, Kohli said at the post-match presentation ceremony. (FULL POINTS TABLE)

Kohli, who missed out on scoring a century after notching up yet another half-century, was critical of his batting department.

The toss wasn’t a massive factor, but we weren’t clinical with the bat I suppose because the wicket was flat. We should have accelerated and gotten closer, but they bowled superbly, he said.

Meanwhile, Kohli was unhappy with the dimensions at Edgbaston and expressed his dissent over the matter.

The toss was vital, especially looking at the boundaries that are this short. Bizarre that it just falls in place with the boundary limitations and with a flat pitch such as this. It’s crazy that things fall in place like that randomly. It’s the first time we are experiencing this, he said.

If batsmen are able to reverse sweep, sweep you for a six on a 59-meter boundary you can’t do much as a spinner. They had to be more smart with their lines as it was difficult to contain runs with one short boundary, he said.

England captain Eoin Morgan said it was an outstanding day for his side. “Winning the toss and batting was an easy decision and it ended up working out. Jason Roy coming back in, Jonny going on and getting a hundred that was magnificent. The continuation of partnerships throughout took us to a good total,” he said.

Talking about India’s wrist spin duo of Yuzvendra Chahal and Kuldeep Yadav, who went for runs on Sunday, Morgan said, “They are huge threats, the two main spinners for India, but them being taken on was great to see.

“It’s the way we want to play our cricket. Throughout the innings the feedback was it got more difficult to bat on, it was getting more purchase off the deck, so I knew it wouldn’t be easy.” 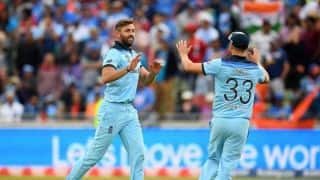