The image of former India skipper MS Dhoni spitting blood after the England game had fans losing sleep. After all, he is an integral part of the team and an injury to the thumb at the business end of the World Cup is the last thing that Indian fans would want.

However, there is good news as the wicketkeeper has no injury threats as Team India prepares for the home stretch of the tournament.

“Hai toh pahadi, woh yodha hai (he hails from the mountains and is a warrior). After more than 300 ODIs, do you think these little things even bother him? He has an amazing capacity to ignore pain. But more importantly, his finger is fine and there is nothing to worry about,” said a source speaking to IANS.

ALSO READ: MS was trying really hard to get the boundary, but it wasn t coming off: Kohli defends Dhoni-Jadhav partnership

Sources in the team management confirmed that getting hit on the fingers while keeping isn’t something new for Dhoni and these things don’t even affect him anymore.

Dhoni walking off the field during the Bangladesh game had given further charge to the rumour mills that his thumb injury had worsened, but it was later revealed that it was nothing more than a loo break and such breaks mean a player cannot return back before eight minutes.

In fact, Dhoni himself has a brilliant take on injuries and how sportspersons should take it in their stride. “If you wait to be 100 per cent before you play a game maybe you’d have to wait five years before you play the next game. It’s something I can afford to do (play with pain),” he revealed.

ALSO READ: ‘MS Dhoni has the answer to every question’

India play their last group game against Sri Lanka on Saturday before moving into the knockouts. Standing second on the points table, India still have a chance of finishing on top if they can beat Lanka and South Africa manage to beat Australia. But for now, it is all about carrying the momentum forward. 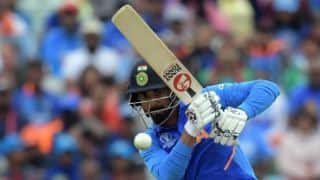 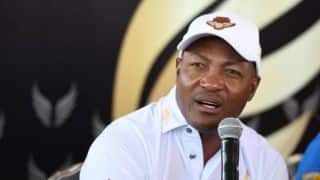