Chasing 242 at Edgbaston, New Zealand won with six wickets left in the last over.

In keeping with the template, this match was not short on tension and saw South Africa lose the plot several times. No, it wasn’t as dramatic as the 2011 World Cup quarter-final in Dhaka. The epic 2015 World Cup semi-final at Eden Park four years ago it was definitely not. But what a game.

South Africa landed in Birmingham needing to beat New Zealand to stay in contention for the 2019 World Cup semi-finals. They were unable to at the very ground at which they last defeated the Blackcaps in a World Cup … back in 1999.

Credit for this goes to how well New Zealand worked in the field, and then how efficiently Kane Williamson batted -while outshining his team-mates – in pursuit of a target of 242. Reprieved moments apart on 76 and 77, Williamson held his nerve to produce a positively high-class innings of astute judgement and infinite patience.

Partnering him in a match-winning stand of 91 in 14.5 overs was Colin de Grandhomme, who played the innings of his ODI career to relieve the pressure on his captain. Williamson’s 103* off 138 balls meshed brilliantly with de Grandhomme’s 47-ball 60 to help New Zealand to a four-wicket win in the final over at Edgbaston. With this, the Blackcaps have topped the World Cup table.

For narrative purposes, let’s go this match in chronological order to show you how vital New Zealand’s hard work all day was, and how a total of 241 was made to look bigger than it actually was.

Early morning rain delayed the start of match 25 of the ICC Cricket World Cup 2019 from 10:30am to noon, and having won the toss, New Zealand put in a disciplined performance to limit South Africa’s to 241/6 on a somewhat sluggish batting surface. Hashim Amla and Rassie van der Dussen were the only ones to cross 50, while Aiden Markram and David Miller threw away starts. Leading the way for the Blackcaps was Lockie Ferguson, who cranked up top speeds and was the most successful bowler with 3/59, figures bruised somewhat by van der Dussen in the final over of the innings.

Trent Boult struck the first blow in the second over when Quinton de Kock (5) missed a length ball and was bowled when attempting to whip it to midwicket. Matt Henry bowled quick and tidily in an opening spell of 7-2-18-0, during which he had Amla and Faf du Plessis swaying and leaving. At the end of the Powerplay, South Africa were 40/1. In that time, just six boundaries were hit.

Both Amla and du Plessis mistimed several shots: hard-handed drives were chopped square on the off side, inside-edges snuck into the leg side, back-foot punches dribbled off the pitch. Neither was allowed to dominate, as Henry and then Ferguson bowled quickly and accurately. Ferguson’s setup of du Plessis was beautiful. A bouncer, clocked at 149kph, was followed by a very quick yorker snuck under du Plessis’ bat. The South African skipper made 23 off 35 balls.

After scores of 13, 6, 6 and 41* not out, Amla scored his first ODI half-century in six innings. It was raised off 75 balls, courtesy his fourth four, which was an aerial whip wide of mid-on off de Grandhomme. But forced to turn over singles against Mitchell Santner’s left-arm spin, Amla tried to manufacture a shot to third man and was bowled for 55.

Markram, also bogged down by Santner’s restrictive lines, tried to break out but wasn’t fluent. On 32, he was dropped by Boult at deep square leg off de Grandomme but the miss didn’t cost much. On 38, Markram charged out to de Grandhomme and skied the ball to deep cover. De Grandhomme bowled his ten overs for just 33 runs, which was golden on the track.

Miller flexed his muscles to clout Boult for six and then Ferguson for consecutive fours, but like the others he fell before he do serious damage. Looking to uppercut Ferguson, Miller was well held by Boult on the run at third man.

Van der Dussen eased to his fifty off 56 deliveries, and kept swinging after Ferguson added Andile Phehlukwayo to his kitty. The economical Henry should have had van der Dussen on 56, but Ferguson dropped him at fine leg. The batsmen thanked Ferguson by clubbing him for six and four in the last over.

And now, a tense chase carried by that man Williamson.

The early loss of Colin Munro for 9, hurried for pace by Kagiso Rabada, was followed by a stand of 60 in 78 balls between Williamson and Martin Guptill. This was not the Guptill we know, instead made to defend and nudge the ball around for 35 off 59 balls before he walked onto his stumps when hooking Phehlukwayo.

Moments later, Ross Taylor got a tickle off the toes off Morris, and South Africa were upbeat. When Tom Latham nicked Morris and walked, the mood swung.

Back-of-a-length deliveries, climbing waist-high, were dabbed and dinked for singles. The third man fielder was kept busy as Williamson and Neesham ran deliveries down for ones to keep runs ticking. It is a hallmark of the game’s best batsmen to keep themselves busy. Williamson ranks among the best in the world today.

The short extra cover patrollers were also made to dive around as soft-handed pushes off Imran Tahir were attempted by Williamson and Neesham. Tahir conceded 14 runs off his first six overs. Lungi Ngidi snuck in a maiden over, the 25th. Neesham had an almighty heave at a Tahir legbreak and connected with air. In the stands, the fans sucked in air in a collective groan.

Williamson, quietly, raised his fifty off 72 balls, with five fours.

Du Plessis was forced to interrupt a superb passage of bowling from Tahir and Ngidi to bring back Rabada and Phehlukwayo, mindful of the fact that each had four overs left. Ngidi hit Williamson’s thigh pad. Phehlukwayo snuck a ball under Williamson’s bat and then drew an inside edge that skirted past the stumps and had de Kock sprinting to fine leg to keep the batsmen to two. Rabada then forced Williamson onto his toes with pace and Amla at slip saved runs. Neesham was made to duck. After two leaves, Williamson poked at wide delivery from Phehlukwayo and got four wide of slips.

Then, another change and with it the breakthrough. Back came Morris, and Neesham edged a nothing shot into Amla’s lap at slip for 23 off 34 balls. Enter de Grandhomme, who drove handsomely and swung crisp sixes off Rabada and Phehlukwayo. Six times in 22 prior ODI innings had de Grandhomme faced upwards of 30 deliveries. Today, he middled nearly everything he faced to take New Zealand home, raising his second ODI half-century in 39 balls with a mowed four to cow corner.

The nerves showed on South Africa. In Tahir’s last over, Miller dropped a tough catch at short midwicket to give de Grandhomme a chance, and off the legspinner’s last ball de Kock held a thin edge off Williamson, on 76, but did not realise it. It cost South Africa the match.

Then, with New Zealand needing 58 off 54 balls, Miller ran to the stumps to collect a throw from Rabada but failed to gather it. Williamson would have been run out on 77. Then Ngidi dropped a catch at fine leg, only to look up and see that Phehlukwayo had over-stepped. It was clear by now that South Africa just didn’t have it in them today.

With 14 needed off 12 balls, de Grandhomme was held at long-off. It was a minor hiccup, for Williamson ensured he finished the job. His hundred came up with a six to level the scores. 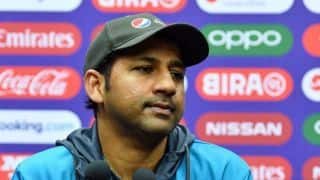 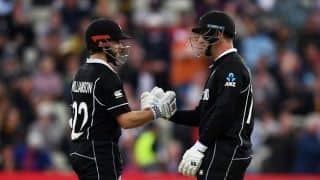