Victory over the Proteas at Old Trafford would ensure the defending champions remain top of the standings.

Australia may have already booked their place in the semi-finals of the World Cup ahead of Saturday’s round-robin finale against South Africa but the match still matters to coach Justin Langer.

Victory over the Proteas at Old Trafford would ensure the defending champions remain top of the standings.

That would mean they stayed in Manchester for a semi-final on Tuesday which would almost certainly be against New Zealand — a team Australia have already defeated during this tournament and the side they beat in the 2015 final.

Langer wants to maintain the feel-good factor in his squad, who have lost just one game out of eight, to India, who are challenging them for top spot in the 10-team group phase.

“It’s about maintaining the momentum of winning,” Australia coach Langer said at Old Trafford on Thursday. “That’s really important for us.

“For this game, some people said it was a dead rubber. There’s nothing dead about it.”

Saturday’s match is set to be the first occasion David Warner and Steve Smith have faced South Africa since their involvement in a ball-tampering scandal during a Test in Cape Town led to 12-month bans for the star batsmen.

“There’s no way we’ll ever get complacent,” said former Australia batsman Langer. “Not with what’s happened the last 12 months. We’re playing good cricket, so we want to continue the momentum of winning going forward.”

Smith and Warner have been repeatedly booed by crowds since arriving in England for a lengthy tour that also includes a five-Test Ashes series.

But Langer said he did not expect the pair to have any extra nerves this weekend despite what happened in their last match against South Africa.

“I don’t think so. They got a good taste of what they were going to expect from the moment we turned up in England,” said Langer.

“This game is significant for a lot of our players, but we’ve just got to take all the emotion out of it.

“We’re here to take the two points, keep the winning momentum going forward and for those guys this is just another exciting game of World Cup cricket for them.”

“I know Mitch and Pat definitely don’t want to miss this game,” he said. 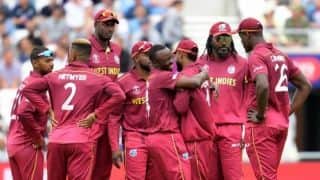