In 15 ODIs this year, Pakistan have won just twice. Here's a lowdown on their World Cup squad.

The Pakistan cricket team, led by Sarfraz Ahmed, heads into the ICC Cricket World Cup 2019 having won just two of 15 ODIs this year.

This run of poor form spans a 3-2 loss in South Africa, a 0-5 whitewash to Australia in the UAE and most recently a 0-4 loss to England (one ODI was washed out).

Under Sarfraz, Pakistan won the 2017 ICC Champions Trophy in England.

The ten-team World Cup starts May 30. Ahead of the big event, here is a lowdown on the Pakistan’s World Cup squad. 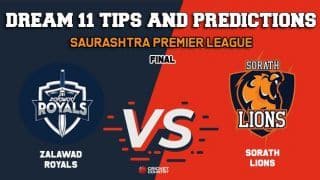 Dream11 Prediction: ZR vs SL Team Best Players to Pick for Today’s Match between Zalawad Royals and Sorath Lions in SPL 2019 at 7:30 PM