Wicketkeeper-batsman Jonny Bairstow feels there are a lot of people who were waiting for England to fail in the ongoing World Cup.

Wicketkeeper-batsman Jonny Bairstow feels there are a lot of people who were waiting for England to fail in the ongoing World Cup. Touted by many as the tournament favourites, England have lost their last two group stage matches and their chances of even qualifying for the semifinals are in jeopardy.

“People were waiting for us to fail. They are not willing us on to win, in many ways, they are waiting for you to get that loss, so they can jump on your throat. It’s a typical English thing to do, in every sport,” ESPNcricinfo quoted Bairstow as saying.

After England’s loss to Australia, former skipper Michael Vaughan had suggested bowing out at the group stage would mark their worst World Cup campaign, while Kevin Pietersen criticised Eoin Morgan, saying the captain was “backing away” from Mitchell Starc’s bowling.

“The comments and things like that, you can give it too much air time and then all of a sudden, before you know it, it’s a big thing and it’s actually really not,” Bairstow said.

“We’ve done it for such a long period of time and this group has been together for near-on three years now, if not longer. So just because we’ve lost two games – yes it’s in a crunch tournament – and people start talking, it’s not going to change the way we go about it,” he added.

The opening batsman also advised his teammates not to get affected by the criticism and be relaxed.

“We just have to be relaxed. The more you tense up, then the more you’re going to go into your shell and therefore not play how you’ve been playing,” said Bairstow.

With eight points from seven games, England need to win both their remaining matches to confirm their place in the knockout stage. However, it won’t be an easy thing for the hosts as they face India (Sunday) and New Zealand (July 3) in their remaining fixtures.

“It’s going to be interesting against India, we obviously know the following that they’ve got and it should be a cracking atmosphere,” said Bairstow.

“Last summer we played really good cricket against them and we won that series and we won it well so I think we go about it the same way we went about it and have been going about our cricket. Our method doesn’t change,” he added. 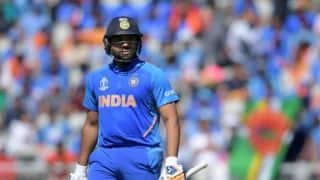 Cricket World Cup 2019: Rohit Sharma posts picture indicating he was not out