India knocked out Bangladesh by 28 runs at Edgbaston on Tuesday to book a place in the semi-finals with one more game still to play.

Former India batsman Sanjay Manjrekar has been at the centre of severe criticism for his remarks while commentating during the ICC Cricket World Cup 2019. Recently, during India s match against hosts England, India s batting coach Sanjay Bangar hinted that the team might field Ravindra Jadeja in the next game against Bangladesh, which will be played at the same venue Edgbaston.

His remarks certainly did not go down well with Jadeja, who took to Twitter on Wednesday to lash out at the cricketer-turned-commentator. Still i have played twice the number of matches you have played and i m still playing. Learn to respect ppl who have achieved.i have heard enough of your verbal diarrhoea.@sanjaymanjrekar, Jadeja wrote.

Manjrekar has never shied away from being at the centre of controversy. He sparked criticism after a series of tweets criticising MS Dhoni, Mohammed Shami and KL Rahul. Pointing out that Dhoni scored more runs off spin balls during the warm-up matches, he said the player and former India captain does not put his wicket on the line as much during big games . (ALSO READ: ‘Five selectors combined wouldn’t have made the runs Ambati Rayudu has in his career’)

“India should be looking at others, and not just Dhoni, to win them matches. The likes of KL Rahul should also be asked as to why he is getting out after getting a start and not finishing with big scores. I love Dhoni best when he bats like he did in the warm-up games where he scored 30 off 30 balls and then the late flourish came. The team management should tell him to keep up with a run-a-ball kind of start and then see how it goes. If it is 12/2, then I can understand that Dhoni’s experience comes in. But once he is in at around 22-25 overs, that should be the endeavour,” explained Manjrekar.

Meanwhile, India knocked out Bangladesh by 28 runs at Edgbaston on Tuesday to book a place in the semi-finals with one more game still to play. The Virat Kohli-led side play their last league match against Sri Lanka on July 6 (Saturday). 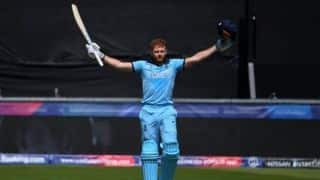 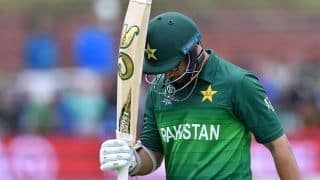