Pant, who lost his spot in India s World Cup squad, will be packing his bags to leave for England at the earliest.

India suffered a major blow on Tuesday when experienced Shikhar Dhawan was ruled out of at least two ICC World Cup 2019 matches after his left thumb was found to have a hairline fracture.

Dhawan s injury has paved the way for selection of another Delhi batsman in Rishabh Pant. According to a report in the Times of India on Tuesday, Pant, who lost his spot in India s World Cup squad, will be packing his bags to leave for England at the earliest.

Once all the details on Dhawan s injury are out, the team management will put out an official request for replacement. And that replacement is going to be Pant. The injury is bad enough to ask for a replacement, sources in the know were quoted as saying in the report.

Dhawan, who was hit on his left thumb by a rising delivery from pacer Pat Cummins against Australia at The Oval, played through pain and notched up a hard-fought century. He didn’t take the field due to the injury during the clash and Ravindra Jadeja fielded in his place for the entire 50 overs.

According to the report, Dhawan will not be available for selection till the match against Bangladesh, which is scheduled for July 2 or even against Sri Lanka on July 6. The team management will be given a thorough report at 2pm UK time which is around 6.30 pm IST on June 11.

Meanwhile, Pant could be boarding the flight to England in the next 48 hours. While it’s confirmed that India may not be able to include him in the playing XI against New Zealand, the destructive left-handed batsman is likely to be roped in for India’s marquee clash against arch-rivals Pakistan on June 16 at Manchester. “KL Rahul could move up the order and open the innings with Rohit Sharma, while Pant could be slotted in at No. 4. But that’s pretty much like thinking aloud now. We’ll weigh these options carefully,” sources were quoted as saying in the report. 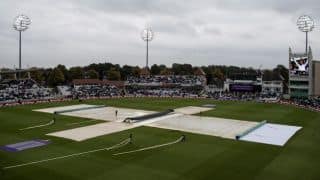