India opener Rohit Sharma's dismissal against the West Indies on Thursday created a flutter as opinions were divided on social media.

India opener Rohit Sharma‘s dismissal against the West Indies on Thursday created a flutter as opinions were divided on social media on whether he was actually out or not. It also once again raised questions on the precision of the Decision Review System (DRS).

India limited-overs deputy Rohit was looking in good touch (on 18 off 22 balls) when a Kemar Roach delivery pitched on good length and jagged back sharply, kissing what the Windies thought was the inside edge of Rohit’s bat.

The on-field umpire turned down the appeal, but Jason Holder and boys decided to review it. The third umpire overturned the umpire’s decision and Rohit was adjudged to have nicked the ball as he left a gap between bad and pad, with Roach and the Windies celebrating.

The verdict left Rohit flabbergasted as he walked off shaking his head. This once again pointed fingers at DRS and it’s judgement at all times as it could not be clear still whether the nick was of the bat or the pad as the ball seemed to have hit both bat and pad at the same time.

The snickometer did show movement, but it was clearly a decision that could have gone either ways. 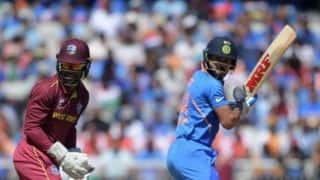