Morgan, 32, was one of 14 players preparing at Hampshire's ground, with Joe Root absent on personal business.

England captain Eoin Morgan will undergo “a precautionary X-ray” after injuring his left index finger in training, the England and Wales Cricket Board announced on Friday.

Morgan was practising with his teammates at the Ageas Bowl in Southampton ahead of Saturday’s unofficial World Cup warm-up against Australia when he took a blow during catching drills.

“Eoin Morgan took a knock to his left index finger fielding this morning. He is going to hospital after practice for a precautionary X-ray,” said a brief statement from the ECB.

England have climbed to the top of the one-day international rankings under the leadership of Morgan, who is also a key member of their powerful batting line-up. (ALSO READ: Morgan defends decision to leave out Denly and Willey from World Cup)

The host nation play the opening match of the World Cup against South Africa on May 30.

England, bidding to lift the men’s trophy for the first time, head into a tournament starting on May 30 as the world’s number one ranked side in ODI cricket.

“Absolutely no regrets, we’re positioned in the best possible place at the moment,” Morgan had told reporters at the launch of England’s World Cup kit in London on Tuesday just hours after they unveiled their 15-man squad for the 50-over showpiece event.

Since the 2015 World Cup England have twice set a new record for the highest total in an ODI innings – 444 for three against Pakistan at Trent Bridge in 2016 and 481 for six against reigning world champions Australia, at the same venue, last year.

“Our exceptional days are better than we could have imagined – the world records etc – I could never have seen those at the start of 2015,” said middle-order batsman Morgan. “That expectation has shifted with level of performance.” 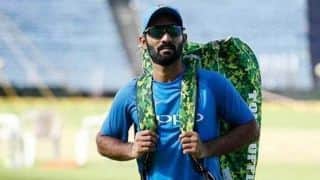 Cricket World Cup 2019: I have managed to stay relevant all these years and still trying hard to be part of the team: Dinesh Karthik No Test in Durban during England tour of South Africa