England's loss means that now only three semi-final spots are left with six teams fighting for it. Here is a look at the World Cup 2019 semi-final qualification scenarios for each team

With England succumbing to a 64-run loss to Australia in Match 32 of ICC Cricket World Cup 2019 at Lord’s, London on Tuesday, the five-time World Champions Australia have secured a semi-final berth, while pre-tournament favourites, England, find themselves in a tough situation having to win at least one of their last two games – against India and New Zealand – to keep their chances for a semi-final spot alive.

The result also means that now only three spots are left for the semi-final and potentially six teams fighting for it. Here is a look at the World Cup 2019 semi-final qualification scenarios for each team from here on:

As mentioned earlier, Australia are through to the semis with two games up their sleeves – against New Zealand and South Africa. They may look to rest key players for the to games or go all out and try to maintain the top spot in the points table.

The 2015 finalists, New Zealand are at a healthy position and remain unbeaten so far in the competition. They will take on Pakistan today in the seventh match and a win will make them the second team in to the semis. NZ will like to win this one and secure a spot as they last two games are against Australia and England.

India can potentially top the table and at this point is the team with maximum number of matches left – 4. They next take on West Indies followed by England, Bangladesh and Sri Lanka. India need to two wins to secure a semis spot but with four potentially tricky oppositions ahead, India would not want to step of off the paddle, especially after how Afghanistan fought hard against the World No.2 side.

It would be fair to say that England have shot themselves on the foot with tame losses to Pakistan and Sri Lanka earlier in the tournament and those two blips could prove costly for the hosts. After failing in chase twice in a row, England’s batting, which was their strongest suit, has come under immense pressure and with India and NZ – ho boast of tournament’s two best bowling attacks – to play next, the road is as tough as it can get for Eoin Morgan’s side. One win out of the two will mean England will have to rely on results of other matches to make it to the semis, while two wins in two matches, will ensure a safe passage

Bangladesh with three wins and two more matches to go have an outside chance of making to their first World Cup semi-final, but they have India and Pakistan as their last two opponents. With the form they are in, Bangladesh could prove to be a tough challenge, more so for Pakistan. They need two wins to go through to the semis without any technicality and if they manage one win, their passage will depend on results of other matches.

After Sri Lanka’s win over England, it has put them in the hunt for the semi-final spot with three more games remaining. Yet it will take a lot for Sri Lanka to make it to the last four. They will have to win two matches to go through put themselves in the semi-final. However, their two washed out games, with points shared, may comeback to bite them. Win all three and they are set, but, the trouble is their last game is against India, while the other two are West Indies and South Africa

The equation is simple for Pakistan. Will all three of their remaining matches and go through to the semis. A loss to NZ today will reduce their chances drastically. But, the plus point for Pakistan is that apart from NZ game, the other two matches are against Afghanistan and Bangladesh – which they are more likely to win than lose.

With just one win in six matches, West Indies are all but out of the tournament. Even if they win their remaining three matches, which includes unbeaten India, they will have to hope for other results to go their way. Sri Lanka and Afghanistan are the other two teams that they will be playing.

It is all over for Faf du Plessis’ side, but they can spoil the party for Sri Lanka. Their last game will be against an already qualified Australia.

Pakistan and West Indies await Afghanistan in their last two games and though they would hope to get a win on the board before they bow out, it looks highly unlikely. 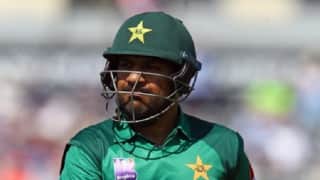 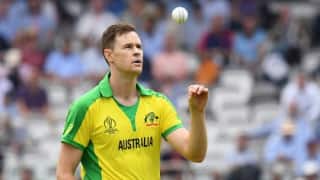