Cricket World Cup 2019: Shakib Al Hasan had an off day against India in warm-up but he will do ‘something big’ in World Cup: Mashrafe Mortaza

Cricket World Cup 2019: Shakib Al Hasan had an off day against India in warm-up but he will do ‘something

The number one ODI all-rounder had a rather off day with both bat and ball in their warm-up game against India which Bangladesh lost by 95 runs on Tuesday.

The number one ODI all-rounder had a rather off day with both bat and ball in their warm-up game against India which Bangladesh lost by 95 runs on Tuesday.

Shakib went for 58 runs in his six overs and picked up two wickets. While batting, he was bowled on the very first ball he faced, thanks to Jasprit Bumrah who bowled a brilliant yorker to get rid of the Bangladesh all-rounder.

“Shakib (Al Hasan) had an off day but he has the experience to come back in a great way,” Mashrafe was quoted as saying by ESPNCricinfo. “I think he will do something big in this World Cup.” (ALSO READ: Cricket World Cup 2019: Confident of making it to top four, Mashrafe Mortaza’s Bangladesh aim to break new ground)

Fast bowler Mustafizur Rahman‘s opening spell was one of the most heartening takeaways for Mashrafe even as Bangladesh lost to India at the Sophia Gardens.

“I am quite relieved seeing Mustafiz (ur) bowl at his old pace,” Mashrafe said.

The 23-year-old left-arm pacer Mustafizur, who took 1 for 19 from his first five overs against India, bowled more accurately than he has done since the New Zealand ODI series in February. (ALSO READ: Cricket World Cup 2019: India and England are obviously favourites, but that doesn’t get you the crown: Shakib Al Hasan)

“He bowled well too, and picked up his pace around 140 kph at times. If he can bowl like he usually does, our bowling becomes a very different unit. I also got a lot out of Rubel (Hossain) and (Mohammad) Saifuddin. We expected to do better with the new ball after not having done well in Ireland.”

Since the Asia Cup in September last year where he took 10 wickets in Bangladesh’s runners-up finish, Mustafizur has struggled with consistency.

“(Medidy Hasan) Miraz, too, has been bowling well recently. In this game (warm-up), we tried to give all our spinners difficult situations to bowl at, so that in the tournament proper they become mentally equipped to deal with a storm of big hitting,” said Mashrafe as Bangladesh tried several things, including pushing bowlers out of their comfort zones. (ALSO READ: Shakib has a point to prove to make sure everybody else believes he’s the no. 1 allrounder: Steve Rhodes)

On the batting front, Mashrafe sounded less pleased and said it would have been better had the batsmen, who got the starts, stayed for long at the crease.

“Mushfiq (ur Rahim) remains consistent, which is important,” Mashrafe said.

“Liton (Das) is doing his job. It would have been better had they both scored centuries. We would have reached 300 had (Mahmudullah) Riyad been there for a little bit longer. I think playing India’s high-quality attack in the practice match is going to help us (in the tournament proper).

“But we can’t lose wickets in pairs. It makes chasing 350-plus very difficult. Liton and Mushfiq got out just when they were becoming aggressive, while Shakib and (Mohammad) Mithun got out first ball, although to good deliveries,” he added.

Bangladesh will begin their World Cup campaign against South Africa on June 2 at The Oval. 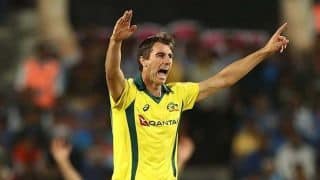