South Africa were defeated by 105 runs in the World Cup opener at The Oval.

South Africa‘s campaign at the ICC Cricket World Cup 2019 has not gotten off to a good start, with hosts and No 1 ranked England defeating them by 104 runs in the tournament opener at The Oval on Thursday.

Faf du Plessis, the South African captain, spoke before the match about the challenge England pose. Come the day, South Africa put in a mixed effort on the ground which left du Plessis looking at a half-empty glass.

After he chose to field, South Africa’s bowlers and fielders forged a performance which on other days could have resulted in a win. Imran Tahir opened the bowling and had Jonny Bairstow out for 0 second ball, and a stand of 106 between Jason Roy and Joe Root was snapped with both batsmen being dismissed in the span of four deliveries.

Jos Buttler was bowled for 16 by Lungi Ngidi, who finished with 3/66 from his ten overs. There were two excellent catches in the deep from Aiden Markram and du Plessis as well. Against a team that regularly crosses 350, setting themselves a target of 312 was good work according to du Plessis.

“I’ll go back now and I’ll think what could I do better, what could I do from the pitch. Their batting lineup is long. So Stokes coming in at five or six, whatever, to get 90 runs the way that he did. I didn’t feel that we made a lot of mistakes with the ball,” he said. “I thought it was a good battle between good bowlers and a very, very strong batting lineup, and it was, you know, probably ten, 15 runs more, if you were really harsh on ourselves, a few soft deliveries. But apart from that, 300 on a good wicket like that, yeah, I would have taken that.

“I thought after the first half, that we did a good job with the bowl. As I said before this game, England more so than any other team in this World Cup, bat longer than anyone else. So if you can stop them with the long batting lineup you have, then you’re doing a great job with the bowl. For them to score as little runs as they did the last 15 overs and us picking up as many wickets as we did, was a great achievement by our both units.”

What didn’t go to plan, however, was South Africa’s chase. Hashim Amla copped a blow to the helmet from Jofra Archer and had to leave the field, after which Archer extracted Markram and du Plessis with pace and bounce. Quinton de Kock and Rassie van der Dussen scored fluent half-centuries, only to be undone by bounce.

The chase petered away, with South Africa bowled out for 207 in 39.5 overs.

“I think the flow of innings, unfortunately, started with Hashim coming off the field. When you are chasing a big score like 310 what you need is a good start,” said du Plessis. “You need to make sure that you settle the bats in the dressing room with a good partnership, whether it’s zero down or one down, but a good start is really important and obviously with him coming off, and then a few of us later, Aiden got out and then one or two of us later, I got out. When you go three-down on a big score like that, you’re making it really tough for our batting unit to perform. And then the score just looks big. It looks too far. It looks too difficult to get there.”

Du Plessis, as you would expect, is eager to put this match behind South Africa.

South Africa next play Bangladesh at The Oval on June 2. 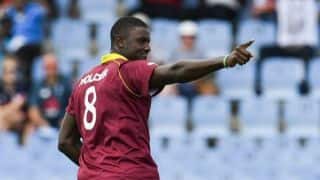