Australia are the reigning world champions, having won four of the past five editions of the tournament, and are expected to open their campaign with a comfortable victory against minnows Afghanistan

Australia captain Aaron Finch says disgraced stars Steve Smith and David Warner will use the World Cup to restore their “world-class” credentials after their role in the infamous ball-tampering scandal in South Africa.

Smith and Warner served 12-month bans following the “sandpaper-gate” incident in the Cape Town Test in March last year and Smith lost the Australia captaincy as a result.

Both players are back in the Australia squad for the World Cup in England and Wales and are set to start their country’s first match of the tournament against Afghanistan in Bristol on Saturday.

Finch said the tournament was the ideal stage to show their competitive qualities had not been dimmed by the scandal. (ALSO READ: Cricket World Cup 2019: Warner, Smith in focus as Australia launch title defence)

“I think when you are a world-class player, you adapt again really quickly and you get up to speed,” he said.

“Having them play, I think, 13 games each in the IPL (Indian Premier League — they actually played 12 each) was really important.

“That’s a higher standard of cricket and it just gets you back up to as close to international competition as you can.”

Finch said Smith would be one of the “all-time greats” by the time he retired.

“There was never any issue about how he would bounce back, and the same with David,” he said.

“They are both so competitive, they have got great records. There was never any doubt how well they would come back.”

The pair were given a hostile reception by some members of the crowd at the Ageas Bowl in Southampton during Australia’s World Cup warm-up victory over England last week in which Smith scored a century and Warner hit 43.

Warner is fit to face Afghanistan after recovering from a sore muscle.

“David is fine. He will play tomorrow, no doubt about that,” said Finch. “We are very close to a starting XI but we are not going to name it yet. Everyone is in contention.”

Australia are the reigning world champions, having won four of the past five editions of the tournament, and are expected to open their campaign with a comfortable victory against minnows Afghanistan. (ALSO READ: Cricket World Cup 2019: It is great when guys keep jumping up to fill positions: Aaron Finch)

But Finch is taking nothing for granted, with Afghanistan having served notice of their ability by beating Pakistan in a warm-up match.

“They are a dangerous side. If you take your foot off the gas for a while they will hurt you, and you still have to play at your absolute best to beat them,” he said.

“Winning their warm-up game against Pakistan, they played brilliantly. They have got a huge following, with support all over the world now, which is huge for cricket.” 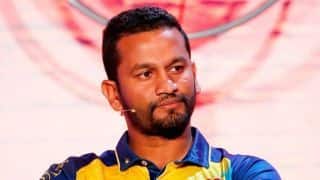 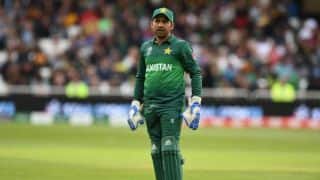