Waqar feels like any other team, Pakistan too need a good start to stay longer in the tournament.

Surprise element is the beauty of Pakistan cricket, says former captain Waqar Younis who has firm belief that the former champions have it in them to repeat the 1992 feat at the ICC World Cup 2019.

Waqar, also a former coach also, said just like 1992, this year Pakistan will go into the showpiece event as “underdogs” but have the capability to spring up surprises.

“It is 27 years since Pakistan won the ICC Men’s Cricket World Cup for the first time and this year feels like it did back then. No one gave us a chance and we arrived as the underdogs. But momentum came, and we won the whole thing, that is the beauty of Pakistan cricket,” Waqar wrote in a column on the ICC website.

“Despite everything that has gone on in the last couple of months, the country is behind the team. They all believe these guys can win the World Cup. If we can get off to a strong start then you never know, this team has a history of producing magic.”

For Waqar, who was not part of the 1992 World Cup-winning side, the only worry is Pakistan’s fielding. “The positive for Pakistan is that they have started scoring big totals. They have showed they are capable of scoring 300 plus and we saw that in their series against England,” he wrote.

“But the biggest issue for me is the fielding. The bowling is moving in a good direction, with Wahab Riaz coming back into the side and Mohammad Amir restored.

“I am sure that will get a bit better but if the fielders don’t take their chances and catch balls and stop the extra 15 or 20 runs then they could struggle. The fielders looked out of sorts in the series against England and that could shake their confidence,” he added.

Waqar feels like any other team, Pakistan too need a good start to stay longer in the tournament. “If they lose a couple of early games, then it will be an uphill task for them after that,” he said.

“If they don’t start well then the negativity from series defeats to England and Australia could seep back in. They have been losing a few games and need to win early to settle nerves.” 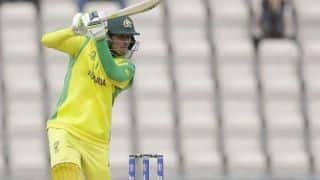