Since the 2015 World Cup, Eoin Morgan's team has risen to the top of the ODI rankings.

World Cup hosts England will kick-start the tournament with everything seemingly in place to finally win a trophy that has eluded them for the competition’s entire 44-year history.

Captain Eoin Morgan, no slouch with the bat himself, can call on a clutch of experienced match-winners in a star-studded batting line-up featuring Jos Buttler and Ben Stokes.

England are hoping Barbados-born fast bowler Jofra Archer, who only qualified in March, will be the X-factor in a varied attack that also includes the experience of seamer Chris Woakes and legspinner Adil Rashid.

A woeful first-round exit at the 2015 World Cup following a defeat by Bangladesh prompted England to overhaul their approach to the 50-over game and give it the status they had previously reserved for Test cricket. The results have been spectacular, with Morgan’s men rising to the top of the one-day international rankings.

They have twice set a new record for the highest total in an ODI innings — 444 for three against Pakistan at Trent Bridge in 2016 and 481-6 against reigning world champions Australia at the same venue last year.

The change in approach was evident in their first ODI after the 2015 tournament, against New Zealand in Birmingham. England they made 408 for nine in a match they eventually won by 210 runs.

(READ: Morgan defends decision to leave out Denly and Willey from World Cup)

Jonny Bairstow and Jason Roy, who average more than 64 as a first-wicket pair, with 1,676 runs and seven century partnerships in 26 innings together at the top of the order in this format, have set the tone.

A middle-order featuring such dynamic hitters as Buttler and Stokes, both of whom have shown they can also rebuild an innings after a collapse, often boosts England’s totals to impregnable levels.

But there is more to England, who made the last of their three losing appearances in a World Cup final back in 1992, than bully batting.

(READ: England team profile – all you need to know)

Both Woakes and Rashid have taken wickets that have proved to be the difference in high-scoring games, while Tom Curran has also made valuable all-round contributions. The addition of 90 mph (145 kmh) Archer has added a new dimension to England’s attack, although they may regret leaving out left-armer David Willey.

England are unlikely to encounter the kind of slow surface that helped prove their undoing when they lost to Pakistan in the semi-finals of the 2017 Champions Trophy in Cardiff. But that defeat did raise doubts over their ability to cope with the pressure of a knockout situation.

England’s record at recent World Cups has been dismal and they will be desperate to make amends in front of packed home crowds.

Former captain Michael Vaughan summed up the prevailing mood of optimism as England prepare to open the tournament against South Africa at the Oval on May 30.

“England will never have a better chance of winning a World Cup,” he wrote in the Daily Telegraph. “Everything has fallen into place for them. Jofra Archer has arrived on the scene at the last minute to give them that extra pace. The two new white balls and flat pitches that suit powerful batting units are just perfect for a team set up like England.

“We all expect them to win the World Cup now,” he added. “They expect to win it as well because they have that inner belief and confidence that this is the year they are going to do it.” 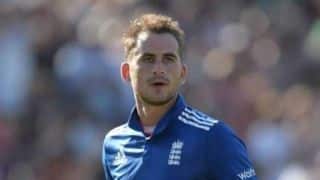