On-field umpires Marais Erasmus and Sundaram Ravi felt that both teams were looking to bounce the ball more than required when throwing in from the outfield.

Pakistan skipper Sarfraz Ahmed and England skipper Eoin Morgan were both spoken to during their game at Trent Bridge on Monday as on-field umpires Marais Erasmus and Sundaram Ravi felt that both teams were looking to bounce the ball more than required when throwing in from the outfield to scruff one side up and prepare the ball for reverse swing.

Speaking after the game, Morgan said: “There were discussions throughout the whole of the two innings,” he said.

“The umpires came to me, mid-innings, and seemed to think that we were throwing the ball in on the bounce too much, or it was being over-exaggerated.

“They emphasised it would be the same for both. It was really about us then… the conversations that were stopping the game were that Pakistan were doing the same thing. Jos (Jos Buttler) was just intrigued to see the ball. When the ball is hit against the LED advertising boards it does scuff it up quite a lot so he was just interested to see if one side was tougher than the other, natural or unnatural.”

Senior Pakistan allrounder Mohammad Hafeez said that Pakistan players were also warned of a penalty if they kept throwing the ball on the bounce from the outfield.

“It’s their job and they were doing their job,” Hafeez said. “A couple of incidents for both sides where the throw didn’t come in one bounce, but on two or three bounces. We got a warning after 20 overs that if we threw in on two bounces, we would get a penalty, so I made a point of running in to hand them the ball. You don’t want to have to do it, but they were just doing their job and they did it right.”

Centurion Joe Root refused to get drawn into the debate and said: “I’m not going to get involved or I’ll only get myself in trouble.” 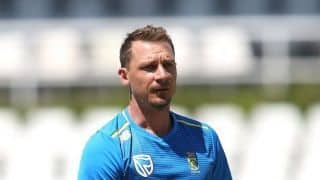