LONDON: Under a clear sky and with a full house expected,India skipper Virat Kohli has won the toss and elected to bat against Australia in game 14 of the ICC Cricket World Cup 2019 at Kennington Oval.

Kohli felt that batting first on a used surface was the best way to put Australia under the pump. Aaron Finch said he would have batted first too.

India named an unchanged side from the won that beat South Africa in Southampton, while Australia are also playing the same XI that beat West Indies. 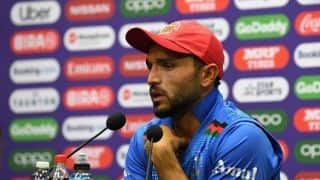