Unbeaten in the tournament so far, the two-time former champions will hope for their fifth win which will put them one step closer to making the semi-finals. On the other hand, theoretically, West Indies aren’t yet out of the race for the last-four but a defeat will certainly end their chances.

India have put faith in the same playing XI which earned them a hard-fought win against Afghanistan in their previous match of the world cup. However, West Indies captain Jason Holder revealed two changes – Sunil Ambris and Fabian Allen have come in for Evin Lewis and Ashley Nurse.

Kohli expects the wicket to slow down. “It looks like a hard surface, a used pitch and expect it will slow down. I think closing out situations and capitalising will be the key,” he said at the toss.

Holder would have wanted to bat first but is hopeful of landing some early blows. 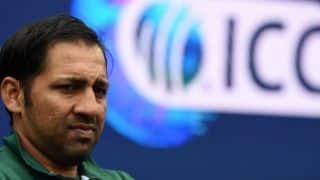