Vijay Shankar is "hopeful" of playing India's next World Cup encounter against Afghanistan as the pain inflicted by a Jasprit Bumrah toe-crusher has subsided.

Injured allrounder Vijay Shankar is “hopeful” of playing India‘s next World Cup encounter against Afghanistan as the pain inflicted by a Jasprit Bumrah toe-crusher has subsided.

Shankar took a short fitness test in which he was made to do some running and also bowled a few balls under the supervision of physio Patrick Farhart and trainer Shankar Basu. It couldn’t be ascertained whether the physio and the trainer were happy with his progress.

There have been instances in the past where a player, who has attended a pre-match press conference hasn’t made it to the playing XI.

Shankar’s responded to queries over his inclusion in monosyllables. Are you feeling better? “Personally, I’ve got a lot better,” he quipped.

Much better? was a follow-up question and “yeah” was the short reply.

The next question was much straighter. Will you be able to play? “Yeah, hopefully,” was all that the Tamil Nadu allrounder said.

Bumrah’s yorkers can be lethal and Shankar said he expected that. “Actually, when you play someone like Bumrah, you always expect that. Still, sometimes we do miss that,” he smiled when asked if he expected a delivery like that.

While the team management’s reason for sending Shankar was to send a signal that he is fit and available, a lot will depend on the morning of the game and prevailing conditions which could change any moment.

In case, Shankar doesn’t play due to fitness concerns or team combination, the toss-up will be between Rishabh Pant and Dinesh Karthik. Pant is a public choice for his exciting strokeplay but Karthik’s experience in a big-ticket tournament can’t be ignored either. 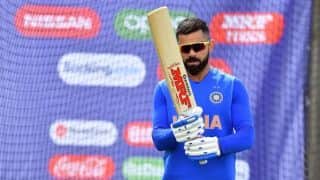 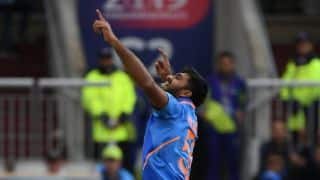