Rohit Sharma steered India to a six-wicket win over South Africa at Southampton.

SOUTHAMPTON: India captain Virat Kohli was moved to term Rohit Sharma‘s unbeaten 122 off 144 balls in India’s six-wicket win over South Africa at Southampton as the best of the batsman’s ODI career.

This is, remember, the batsman who has three ODI double-centuries.

Set a target of 228 to beat South Africa in their ICC Cricket World Cup 2019 opening match, India won with 15 deliveries to spare. Rohit saw out testing opening spells from Kagiso Rabada and Chris Morris to graft his way to a fine unbeaten innings, forging partnerships with Kohli, KL Rahul and MS Dhoni along the way.

This is Rohit’s 23rd ODI century – taking him past Sourav Ganguly to third on India’s all-time list – and Kohli said it was the best he’s seen from his team-mate given the gravity of this match and the way he sussed out the Rose Bowl surface and South Africa’s attack.

“I think in my opinion this is by far his best ODI innings because of the kind of pressure the first game brings from a World Cup point of view. And then I know, as a batsman, when you go in and a few balls bounce like that, it’s not easy to gather yourself again and play in a calm manner,” Kohli told reporters after the match.

“A lot of times batsmen tend to hit their way out of the situation. But he was very composed, he was very — he’s played so many games, we expect a lot of maturity and a lot of responsibility from someone like him.

“In my opinion, of all the brilliant innings I have seen him play, I think this, for me, was the top of the pile because of the way he compiled his innings and at no stage did we feel like, or he felt like he is going to throw it away.”

Rohit lost his opening partner Shikhar Dhawan for 8 to a hostile Rabada, who used the short ball to good effect. He was made to weave and duck, and saw one edge fly over backward point. He didn’t back down, and when Rabada persisted with the short stuff Rohit got a top-edged six over fine leg.

He then stood tall to punch the ball past point, and once Rabada and Morris were taken off he milked the spinners. Kohli (18), Rahul (26) and Dhoni (34) all made handy cameos, but it was Rohit’s ability to see out the tough passages and then open up against the spinners that kept India in control.

Not having to get into third gear allowed India to coast to victory, and Kohli was effusive in his praise for Rohit.

“I think controlling the game so beautifully from one end and allowing the others to display themselves and string in small little partnerships, looking at the fact that they were only chasing 228, he played the perfect innings for that kind of a situation on that kind of a wicket against a bowling attack that was threatening to pick up wickets at any stage,” he said.

India next play Australia at The Oval on June 9. 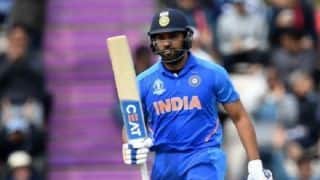 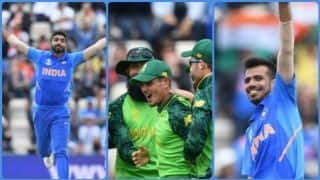