Mayank Agrawal was brought in on the team management's insistence and it is learnt, Rayudu was left quite disappointed by the turn of events.

Former India opener Virender Sehwag Wednesday said the ICC Cricket World Cup 2019 snub must have been painful for middle-order batsman Ambati Rayudu, who retired from all forms of cricket.

Snubbed twice over for the ongoing World Cup, Rayudu retired from all forms of cricket without specifying his reasons for calling it quits.

“Must definitely be very painful at being ignored for the World Cup for #AmbatiRayudu but I wish him all the very best in life after retirement,” Sehwag said on his Twitter post.

The 33-year-old Rayudu was in India’s official standbys list for the big event in the UK but was ignored despite the injury-forced ouster of allrounder Vijay Shankar. (Read: Ambati Rayudu s retirement letter to BCCI)

Mayank Agrawal was brought in on the team management’s insistence and it is learnt, Rayudu was left quite disappointed by the turn of events.

Rayudu played 55 ODIs for India, scoring 1694 runs at an average of 47.05. The player, who could never break into the Test team, was in the spotlight before the World Cup, but was was ignored at Shankar’s expense in India’s final squad.

Chairman of selectors MSK Prasad had justified the move by saying that Shankar had “three-dimensional skills”. Shankar couldn’t make much of an impact and was eventually forced out by a toe injury. (ALSO READ: ‘Five selectors combined wouldn’t have made the runs Ambati Rayudu has in his career’)

Rayudu had then taken a dig at Prasad’s statement with a cheeky social media post. “Just Ordered a new set of 3d glasses to watch the world cup,” he had tweeted at the time.

He was later put in the standbys list but wasn’t called. 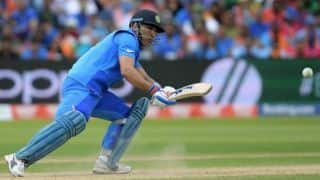 MS Dhoni played an important innings, did exactly what was right for the team: Sachin Tendulkar